We are delighted to report that Edinburgh DataVault now has a quicker and easier process for users. The team have been working hard to overhaul the form for creating a new ‘vault’ to improve the user experience. The changes allow us to gather all the information we need from the user directly through a DataVault web page. The users no longer need to first login to Pure and create a separate dataset record there. Instead, that bit will be automated for them.

I have explained the new process and walked users through the new form in a new and updated how-to video, now combining the getting started information with the demo of how to create a vault:

Get started and create your vault! (8 mins)

The new streamlined process for users is represented and compared to our open research data repository DataShare in this workflow diagram. DataVault is designed for restricted access, but can also handle far larger datasets than DataShare. 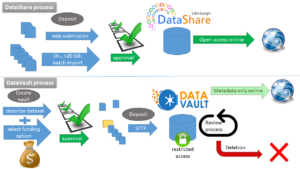 The DataVault process includes the gathering of funding information, and review and deletion none of which are present in the DataShare workflow since they would not be relevant to that open research data repository.

The arrow showing DataVault metadata going to the internet represents the copying of selected metadata fields into Pure, where they are accessible as dataset records in the university’s Edinburgh Research Explorer online portal.

Our new course “Archiving Your Research Data”, featuring Sara Thomson, Digital Archivist, provides an introduction to digital preservation for researchers, combined with practical support on how to put digital preservation into practice using the support and systems available here at University of Edinburgh such as the DataVault. For future dates and registration information please see our Workshops page.

A recording of an earlier workshop (before the new interface was released) is also available: Archiving Your Research Data Part 1: Long-term Preservation.

If you are a University of Edinburgh principal investigator, academic, or support professional interested in using the Edinburgh DataVault, please get in touch by emailing data-support@ed.ac.uk.

Following a year-long consultation with research committees and other stakeholders, a new RDM Policy (www.ed.ac.uk/is/research-data-policy) has replaced the landmark 2011 policy, authored by former Digital Curation Centre Director, Chris Rusbridge, which seemed to mark a first for UK universities at the time. The original policy (doi: 10.7488/era/1524) was so novel it was labeled ‘aspirational’ by those who passed it.

RDM has come a long way since then, as has the University Research Data Service which supports the policy and the research community. Expectation of a data management plan to accompany a research proposal has become much more ordinary, and the importance of data sharing has also become more accepted in that time, with funders’ policies becoming more harmonised (witness UKRI’s 2016 Concordat on Open Research Data).

Although a bit longer (the first policy was ten bullet points and could fit on a single page!), the new policy adds clarity about the University’s expectations of researchers (both staff and students), adds important concepts such as making data FAIR (explanation below) and grounding concepts in other key University commitments and policies such as research integrity, data protection, and information security (with references included at the end). Software code, so important for research reproducibility, is included explicitly. Definitions of research data and research data management are included, as well as specific references to some of the service components that can help – DMPOnline, DataShare, etc. A commitment to review the policy every 5 years, or sooner if needed, is stated, so another ten years doesn’t fly by unnoticed. Important policy references are provided with links. The policy has graduated from aspirational – the word “must” occurs twelve times, and “should” fifteen times. Yet academic freedom and researcher choice remains a basic principle.

The annual Dealing With Data conference has become a staple of the University’s data-interest calendar. In this post, Martin Donnelly of the Research Data Service gives his reflections on this year’s event, which was held in the Playfair Library last week.

One of the main goals of open data and Open Science is that of reproducibility, and our excellent keynote speaker, Dr Emily Sena, highlighted the problem of translating research findings into real-world clinical interventions which can be relied upon to actually help humans. Other challenges were echoed by other participants over the course of the day, including the relative scarcity of negative results being reported. This is an effect of policy, and of well-established and probably outdated reward/recognition structures. Emily also gave us a useful slide on obstacles, which I will certainly want to revisit: examples cited included a lack of rigour in grant awards, and a lack of incentives for doing anything different to the status quo. Indeed Emily described some of what she called the “perverse incentives” associated with scholarship, such as publication, funding and promotion, which can draw researchers’ attention away from the quality of their work and its benefits to society.

However, Emily reminded us that the power to effect change does not just lie in the hands of the funders, governments, and at the highest levels. The journal of which she is Editor-in-Chief (BMJ Open Science) has a policy commitment to publish sound science regardless of positive or negative results, and we all have a part to play in seeking to counter this bias. 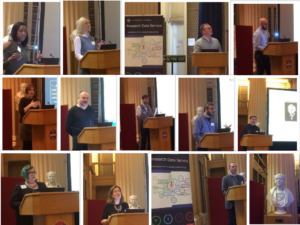 A collage of the event speakers, courtesy Robin Rice (CC-BY)

In terms of other challenges, Catriona Keerie talked about the problem of transferring/processing inconsistent file formats between heath boards, causing me to wonder if it was a question of open vs closed formats, and how could such a situation might have been averted, e.g. via planning, training (and awareness raising, as Roxanne Guildford noted), adherence to the 5-star Open Data scheme (where the third star is awarded for using open formats), or something else? Emily earlier noted a confusion about which tools are useful – and this is a role for those of us who provide tools, and for people like myself and my colleague Digital Research Services Lead Facilitator Lisa Otty who seek to match researchers with the best tools for their needs. Catriona also reminded us that data workflow and governance were iterative processes: we should always be fine-tuning these, and responding to new and changing needs.

Another theme of the first morning session was the question of achieving balances and trade-offs in protecting data and keeping it useful. And a question from the floor noted the importance of recording and justifying how these balance decisions are made etc. David Perry and Chris Tuck both highlighted the need to strike a balance, for example, between usability/convenience and data security. Chris spoke about dual testing of data: is it anonymous? / is it useful? In many cases, ideally it will be both, but being both may not always be possible.

This theme of data privacy balanced against openness was taken up in Simon Chapple’s presentation on the Internet of Things. I particularly liked the section on office temperature profiles, which was very relevant to those of us who spend a lot of time in Argyle House where – as in the Playfair Library – ambient conditions can leave something to be desired. I think Simon’s slides used the phrase “Unusual extremes of temperatures in micro-locations.” Many of us know from bitter experience what he meant!

There is of course a spectrum of openness, just as there are grades of abstraction from the thing we are observing or measuring and the data that represents it. Bert Remijsen’s demonstration showed that access to sound recordings, which compared with transcription and phonetic renderings are much closer to the data source (what Kant would call the thing-in-itself (das Ding an sich) as opposed to the phenomenon, the thing as it appears to an observer) is hugely beneficial to linguistic scholarship. Reducing such layers of separation or removal is both a subsidiary benefit of, and a rationale for, openness.

What it boils down to is the old storytelling adage: “Don’t tell, show.” And as Ros Attenborough pointed out, openness in science isn’t new – it’s just a new term, and a formalisation of something intrinsic to Science: transparency, reproducibility, and scepticism. By providing access to our workings and the evidence behind publications, and by joining these things up – as Ewan McAndrew described, linked data is key (this the fifth star in the aforementioned 5-star Open Data scheme.) Open Science, and all its various constituent parts, support this goal, which is after all one of the goals of research and of scholarship. The presentations showed that openness is good for Science; our shared challenge now is to make it good for scientists and other kinds of researchers. Because, as Peter Bankhead says, Open Source can be transformative – Open Data and Open Science can be transformative. I fear that we don’t emphasise these opportunities enough, and we should seek to provide compelling evidence for them via real-world examples. Opportunities like the annual Dealing With Data event make a very welcome contribution in this regard.

PDFs of the presentations are now available in the Edinburgh Research Archive (ERA). Videos from the day are published on MediaHopper.

As many of you will already know EPSRC set out its research data management (RDM) expectations for institutions in receipt of EPSRC grant funding in May 2011, this included the development of an institutional ‘Roadmap’. EPSRC assessment of compliance with these expectations will begin on 1 May 2015 for research outputs published on or after that date.

In an effort to gauge the University of Edinburgh’s ‘readiness’ in relation to EPSRC’s RDM expectations, we are conducting a short survey of EPSRC grant holders.

The survey aims to find out more about researcher awareness of those expectations concerning the management and provision of access to EPSRC-funded research data as detailed in the EPSRC Policy Framework on Research Data.

We aim to conduct follow-up interviews with EPSRC grant holders who are willing to talk through these issues in a bit more detail to help shape the development of the RDM services at the University of Edinburgh.

We will endeavour to make available some of our findings shortly. In the meantime, if you want to use or refer to our survey we have posted a ‘demo’version below:
https://edinburgh.onlinesurveys.ac.uk/epsrc-expectations-awareness-demo

Should you decide to make use of our survey, let us know, as we can potentially share our data with each other to benchmark our progress.

Upadate: A link to the findings can be found at: https://libraryblogs.is.ed.ac.uk/datablog/files/2016/07/EPSRC-RDM-Expectations-Awareness-Survey-Findings.pdf