Last week I was honoured to accept an invitation to speak at the Library Technology Conclave at Somaiya Vidyavihar University in Mumbai, India, organised by Informatics Limited and the University. A prelude the day before the event included a half-day “Research Data Management (RDM) Basics” tutorial for about 50 attending librarians, which I delivered based on adaptations of our Research Data Support team’s training materials for PhD students and staff. The training exercises, developed from a few other external librarian training sessions I’ve done, focused on building librarians’ confidence in supporting researchers with data management planning and data sharing. Doing the training in person helped me to overcome communication barriers and foster deeper engagement than could have happened online only. 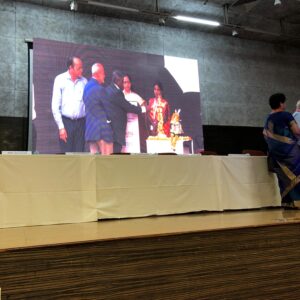 Lighting the flame of the hybrid conference

The conference was on the theme of “Research Data Management and Stewardship: Building Blocks for Open Science,” with a number of eminent librarians, scientists, and educators speaking in keynotes and on panels in six thematic sessions, in-person and remotely. There was a palpable sense of urgency to the proceedings, as those in the room were concerned that India’s scientific institutions, without funder mandates, national open infrastructure, nor observable changes in cultural norms for RDM and Open Science, might be left behind, given this emerging new, more transparent way of conducting research. Questions focused not on the What or Why of Open Science, but how to instigate behavioural change of scientists and researchers, and how librarians could create demand for new services such as data repositories and quickly skill themselves up.

I have some empathy for their position. A decade or so ago I attended conferences which felt more like hand-wringing than change-making, with endless talk of carrots and sticks (and carrot-stick jokes), with researchers explaining over and again their reluctance to be ‘scooped’ by giving access to their data. I am not sure what caused the tipping point to talking about the potential of data sharing and open science to the exciting reality of it happening, but it seems to have come round (more or less). I do still harbour concerns that our own researchers will be left out of participation in the shared infrastructure that is the European Open Science Cloud because of Brexit-related barriers here. 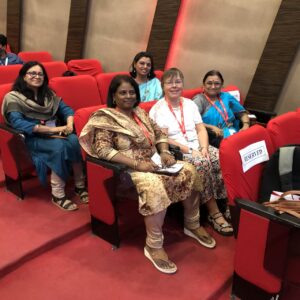 One talk that piqued my interest involved a survey of librarians in Gujarat about RDM and their capacity to deliver new types of service, by Dr. Bhakti Gala. As the Indian LIS (library and information science) curriculum was apparently seen to not be delivering RDM training to any great extent yet, the researcher had asked how the librarians had acquired knowledge of RDM. She said that about half the librarians who had pursued self-training had learned from the free, online MANTRA course (which stands for Research Data Management Training), offered by the University of Edinburgh.

The Chair of the panel, Prof Shalini Urs, with whom I had had a conversation over dinner with about the name of the course, said [naming me, as I sat in the audience] that I would be happy to hear that was the case, to which I of course smiled and nodded. Alluding to our prior conversation about whether the name was a cultural [mis-]appropriation or not, she looked me in the eye and said, “It is Our MANTRA, now.” Which is, of course, the great thing about Openness.

Following a year-long consultation with research committees and other stakeholders, a new RDM Policy (www.ed.ac.uk/is/research-data-policy) has replaced the landmark 2011 policy, authored by former Digital Curation Centre Director, Chris Rusbridge, which seemed to mark a first for UK universities at the time. The original policy (doi: 10.7488/era/1524) was so novel it was labeled ‘aspirational’ by those who passed it.

RDM has come a long way since then, as has the University Research Data Service which supports the policy and the research community. Expectation of a data management plan to accompany a research proposal has become much more ordinary, and the importance of data sharing has also become more accepted in that time, with funders’ policies becoming more harmonised (witness UKRI’s 2016 Concordat on Open Research Data).

Although a bit longer (the first policy was ten bullet points and could fit on a single page!), the new policy adds clarity about the University’s expectations of researchers (both staff and students), adds important concepts such as making data FAIR (explanation below) and grounding concepts in other key University commitments and policies such as research integrity, data protection, and information security (with references included at the end). Software code, so important for research reproducibility, is included explicitly. Definitions of research data and research data management are included, as well as specific references to some of the service components that can help – DMPOnline, DataShare, etc. A commitment to review the policy every 5 years, or sooner if needed, is stated, so another ten years doesn’t fly by unnoticed. Important policy references are provided with links. The policy has graduated from aspirational – the word “must” occurs twelve times, and “should” fifteen times. Yet academic freedom and researcher choice remains a basic principle. Timestamp showing the accession of the deposit on the 2nd of August.

The depositor was Dr Tom Davey, Senior Experimental Officer in the School of Engineering, who said:

“It is a pleasure for us all in FloWave to see one of our datasets achieve this milestone for Edinburgh DataShare. This is also the tenth DataShare upload making use of experimental outputs from the FloWave Ocean Energy Research Facility. Providing a reliable and accessible repository of our project outputs is not only important for our funders, but also promotes new research collaborations and builds lasting impact for our experimental programmes. This particular project will aid in the understanding measuring wave and currents at deployment sites for offshore renewable energy technologies, and adds to the existing FloWave portfolio of datasets in the field of wave energy, tidal energy, advanced measurement, and remote operated vehicles.”

You can explore more data generated at FloWave in the IES DataShare Collection:

Although the ‘wave buoy in current’ dataset is under temporary embargo, currently set to expire on the 5th of September, it is possible to request the data using DataShare’s request-a-copy feature in the meanwhile. Embargoes may be extended, or lifted early, usually reflecting publication dates.

You might also enjoy this hilarious and very popular video about FloWave:

Covid-19 has shaken up our world, and disrupted University life as we know it. But in terms of a silver lining, it has provided opportunities for open data / open research to prove their worth, in the search for a vaccine and other approaches to managing and treating the complications of the virus. SPARC Europe have collected a number of case studies on Open Science and the Coronavirus. If you’ve been working on Coronavirus research here at Edinburgh, we’d love to hear from you, especially if there is anything we might be able to do to help. So far we have engaged with researchers in all three Colleges studying, or hoping to study, an aspect of COVID-19; about handling sensitive data, archiving or sharing relevant data, or bidding for new research.

How has it affected us in Research Data Support?

From the researcher’s point of view, in some cases collecting and processing or analysing new data may be more difficult than it usually is, and in many cases impossible without access to lab equipment or direct contact with research subjects. So why not turn your attention to other elements of RDM, such as preparing older data for deposit, and linking it with your published research papers to fortify the scholarly record?

What can you do?