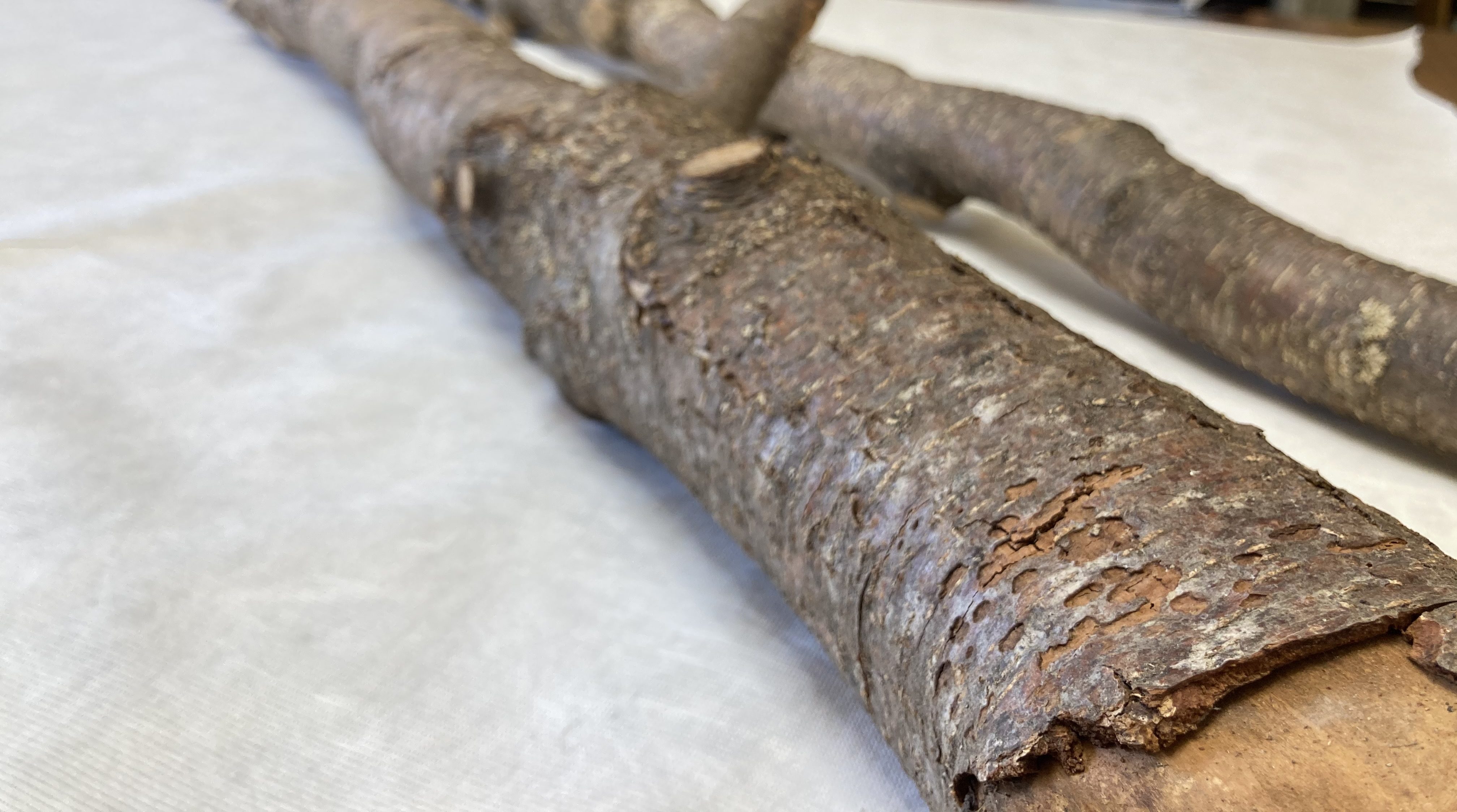 Despite this series being called The Archive in 70 Objects, we don’t actually have a great deal of artefact-type objects. We have lots of very interesting collections related to sound (and sound-related objects) and manuscripts etc, however the few artefacts we do have are related to material culture. One such item needed to be checked for conservation purposes recently and we thought you might like to see.

These are two branches of Alder. They come from Kintail and we’ve had them in the archive since about 1988. They have lasted fairly well over the years considering they have not been perhaps stored in the best location.

Why would we have two branches of alder in our archive?

These branches are actually stilts, or cas-mhaide “wooden legs. They were donated by Duncan “Stalker” Matheson (1929-2010) , Camusluinie, Kintail. Duncan was visited by fieldworkers on a few occasions and contributed material related to place names, as well as local tales and traditions. 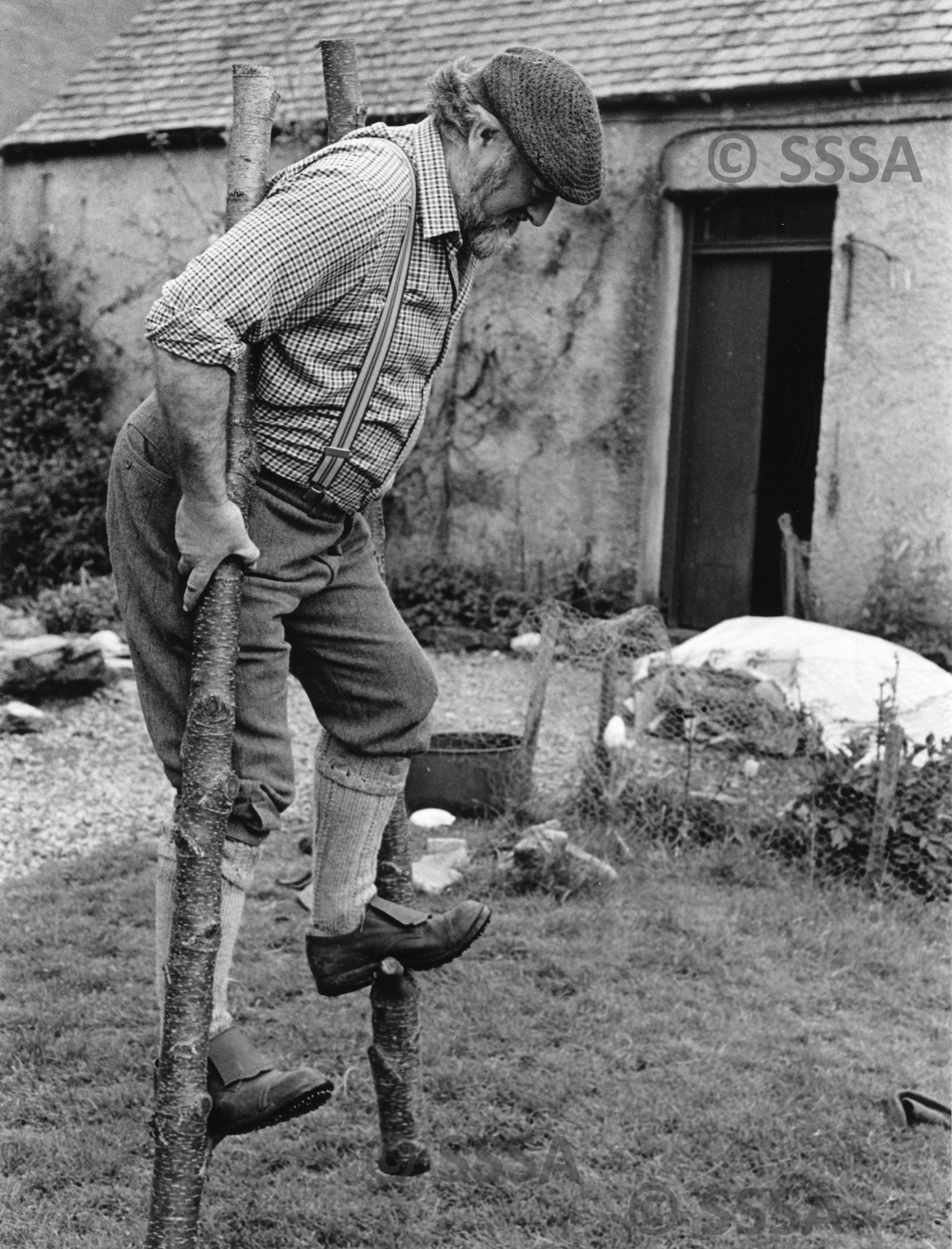 In the 1980s there was a fieldwork trip to Kintail to capture video film of Duncan thatching a roof. While they were there, Duncan told Donald Archie MacDonald about the practice of using stilts to cross the River Elchaig.

Duncan told us when he was young, in the sparsely populated Gaelic-speaking community, any of the local people who had occasion to cross the River Elchaig regularly made use of stilts… these stilts were home made, quickly cut and shaped from the local scrub woodland. They were often of alder, but any suitable sapling with a branch projecting at a convenient angle would do. Generally, there were a pair of stilts left suspended on the low branches of trees, on either side of the river, for the use of anyone who needed them.

Among notable users of stilts in Duncan’s boyhood was a famous local character, strongman, poacher and ‘smuggler’ (illicit distiller) Alex MacKay, better known as Ali Mal. Ali was reputed ro have been able to carry a full ten-stone sack of meal, tied to his back, across the river on stilts. Ali’s brother Donald, also known as ‘The Bard’, was another regular user, as was their sister Liosaidh/Leezie (Elizabeth), a diminutive woman who could perform the remarkable feat of crossing the river, hopping on one stilt.

We are not 100% sure if the stilts show in the picture with Duncan are the same stilts that we have in the archive, but these certainly came to us from that visit. The images taken on that day were by the late Ian MacKenzie, fieldwork photographer and Photographic archive curator. He captured this wonderful image of Duncan being film, using the stilts in the river.

Last week, Caroline Milligan wrote about Ian and his fieldwork photography. If you haven’t already enjoyed that post you can read it here:  https://libraryblogs.is.ed.ac.uk/sssa/object-12/ ‎

We wrote a short post about another artefact-type object here: https://libraryblogs.is.ed.ac.uk/sssa/object10/

There is a poem The Stilt Men of Kintail, by Helen Nicholson https://magmapoetry.com/archive/magma-38/poems/stilt-men-of-kintail/