It’s extremely hard for me to pick one object from the School of Scottish Studies Archives.  I first discovered its treasures when Louise Scollay found a lever arch file full of clippings and letters about Cleekwork and she asked me to make a cleek glove based on a pattern found there.  This work developed into a Handmaking in the Archives event for the University of Edinburgh Festival of Creative Learning.

Unsurprisingly perhaps, my interest in the SSSA focuses on the world of textiles and wool processing in particular.  The archive is packed with images, stories and songs of sheep, shearing, spinning and the transformation into cloth through knit or weave.  Louise herself selected a Barra waulking song as her favourite object, celebrating the community preparation of tweed.  Coming in a close second for my own favourite is the Tom Anderson 1960 recording of Rosabel Blance singing her own composition of ‘Roo the Bonny Oo’ which magically replicates the sound of a burring spinning wheel.

However, I knew my special SSSA object had to come from Peigi Anndra MacRae.  With her sister, Mairi, Peigi opened her home to a young Margaret Fay Shaw in the late 1920s and introduced her to the crofting way of life, traditions, stories and music of South Uist.  After her marriage to ethnologist John Lorne Campbell, Shaw remained fast friends with Peigi Anndra as she developed the work which would become Folksongs and Folklore of South Uist. 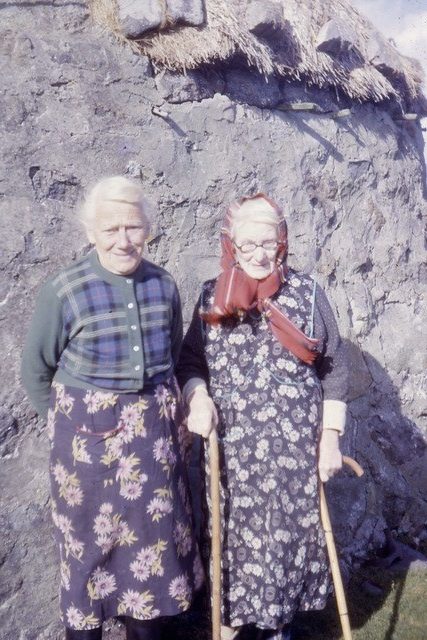 The relationship between folklorist / ethnologist and contributor is fascinating:  There are ethical concerns we are more aware of now which can make the uneven power relations between collector and singer feel uncomfortable; the mantle of expertise may have been borne by the fieldworker, but the incredible depth of knowledge lays with the singer or contributor.  In many ways, the interest lies for me in the process of collecting, not necessarily the item itself.

Peigi Anndra’s singing of Hò Ro Gur Toigh Leinn Anna was recorded by Donald Archie MacDonald (who worked at the SSSA between 1962 to 1994) in 1964.  It tells of a woman sad that she is unable to take part in waulking the tweed and was composed by Mrs Catriona Campbell of South Lochboisdale.

What I love is the uncertainty of memory, repetition and occasional pauses of Peigi Anndra’s singing, the quiet interjections of MacDonald where she forgets the words, Mairi calling corrections from across the room, the whirr and click of the reel to reel tape.  Recordings like this are not only significant in recording traditional song and ways of knowing, but in reminding listeners and researchers down the years of the process of recording.  It is a precious reminder that we should not forget the relationships and labour of collecting which have constructed the archive.

Dr Alison Mayne is a researcher in everyday textiles and wellbeing, with additional interests in digital communities and design for older people. She holds awards from Women’s History Scotland, The Pasold Fund and is a University of Glasgow 2020-21 Visiting Library Fellow, supported by the William Lind Foundation.

Image used with kind permission of the MacRae family. Please do not reproduce.

There are further recordings from The School of Scottish Studies Collections featuring Peigi and Mairi MacRae. Many of these are available to stream via Tobar an Dualchais.

For more information about Margaret Fay Shaw and her relationship with the MacRaes visit The National Trust:  https://www.nts.org.uk/stories/stories-songs-and-starlings