I’m happy to let you know that the Library now has access to the South Asia Archive from Taylor & Francis, a specialist digital platform providing global electronic access to culturally and historically significant literary material produced from within, and about, the South Asian region. 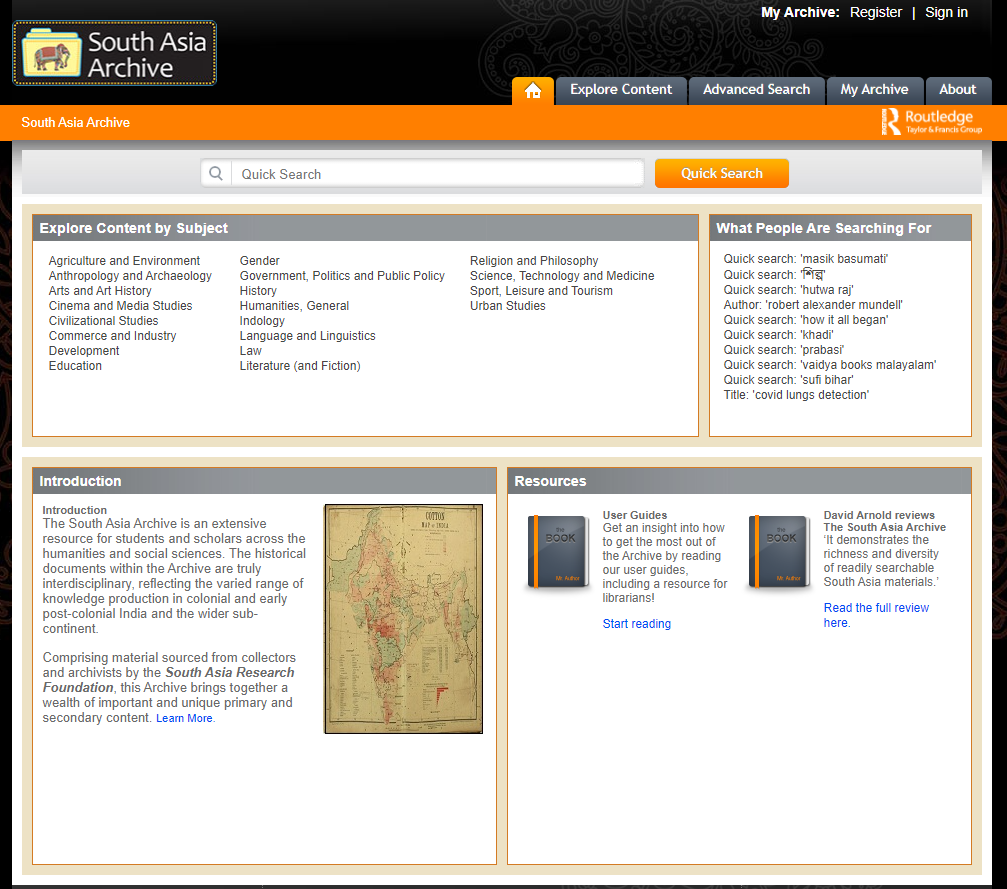 You can access South Asia Archive via the Digital Primary Source and Archive Collections guide or the Databases A-Z list. You will also be able to access it from DiscoverEd within the next few days. END_OF_DOCUMENT_TOKEN_TO_BE_REPLACED

Thanks to a request from a HCA staff member the Library has been given extended trial access to South Asia Archive from Taylor & Francis, providing online access to documents ranging from the mid-18th to the mid-20th Century.

You can access South Asia Archive from the E-resources trials page.
Access is available on and off-campus.

I’m happy to let you know that British Online Archives (BOA) are providing 30 days free access (starting from 23rd March) to its entire collection of digital primary sources in light of the Covid-19 outbreak.

BOA provide students and researchers with access to unique collections of primary source documents. Their website hosts over 3 million records drawn from both private and public archives. These records are organised thematically, covering 1,000 years of world history, from politics and warfare to slavery and medicine. END_OF_DOCUMENT_TOKEN_TO_BE_REPLACED

I’m pleased to let you know the Library currently has trial access to Age of Exploration, a digital primary source collection from Adam Matthew Digital. This database allows you to discover through archive material the changing shape of exploration through five centuries, from c.1420-1920.

END_OF_DOCUMENT_TOKEN_TO_BE_REPLACED

Service Newspapers of World War Two contains an extensive range of both rare and well-known wartime publications for soldiers serving in major theatres around the world. Publications are included from many key nations involved in the conflict, such as the US, Canada, New Zealand, India, and the countries of Europe, Africa and the Middle East. Both Allied and Axis publications are presented, offering a broad view of the war and the experiences of those on its front lines. END_OF_DOCUMENT_TOKEN_TO_BE_REPLACED

Thanks to a request from staff in HCA the Library currently has trial access to a brand new digital primary source collection from Adam Matthew Digital, Age of Exploration. This database allows you to discover through archive material the changing shape of exploration through five centuries, from c.1420-1920.

Thanks to recommendations from members of staff and requests via RAB from students the Library is continually adding new books to its collections both online and in print. Here are just a (very) small number of the books that have been added to the Library’s collections in semester two, 2017/18 for the School of History, Classics and Archaeology and these demonstrate the wide range of subjects being taught, studied and researched within School.

The Pacific war and its political legacies by Denny Roy (shelfmark: D767 Roy.)

The Library has been given trial access to the British Online Archives (BOA) collection Secrecy, sabotage, and aiding the resistance: how Anglo-American co-operation shaped World War Two. Giving you unique insight into US-UK diplomacy, intelligence sharing, and sabotage operations in enemy territory from 1939-1954.

Below are the databases you have access to via ProQuest. As there are so many I have split them into broad categories. END_OF_DOCUMENT_TOKEN_TO_BE_REPLACED