As part of Open Access Week, the Data Library and Scholarly Communications teams in IS hosted a lecture by emeritus Professor Geoffrey Boulton drawing upon his study for the Royal Society: Science as an Open Enterprise (Boulton, et al 2012). The session was introduced by Robin Rice who is the University of Edinburgh Data Librarian.  Robin pointed out that the University of Edinburgh was not just active, but was a leader in research data management having been the first UK institution to have a formal research data management policy.  Looking at who attended the event, perhaps unsurprisingly the majority were from the University of Edinburgh.  Encouragingly, there was roughly a 50:50 split between those actively involved in research and those in support roles.  I say encouragingly as it was later stated that often policies get high-level buy in from institutions but have little impact on those actually doing the research. Perhaps more on that later.

For those that don’t know Prof. Boulton, he is a geologist and glaciologist and has been actively involved in scientific research for over 40 years.  He is used to working with big things (mountains, ice sheets) over timescales measured in millions of years rather than seconds and notes that  while humanity is interesting it will probably be short lived!

Arguably the way we have done science over the last three hundred years has been effective. Science furthers knowledge.  Boulton’s introduction made it clear that he wanted to talk about the processes of science and how they are affected by the gathering, manipulation and analysis of huge amounts of data: the implications, the changes in processes, and why evenness matters in the process of science. This was going to involve a bit of a history lesson, so let’s go back to the start.

Open is not a new concept 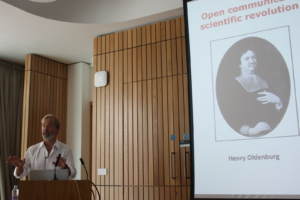 “Open is not a new concept”

Open has been a buzzword for a few years now.  Sir Tim Berners-Lee and Prof. Nigel Shadbolt have made great progress in opening up core datasets to the public.  But for science, is open a new concept? Boulton thinks not. Instead he reckons that openness is at the foundations of science but has somehow got a bit lost recently.  Journals originated as a vehicle to disseminate knowledge and trigger discussion of theories.  Boulton  gave a brief history of the origins of journals pointing out that Henry Oldenburg is credited with founding the peer review process with the Philosophical Transactions of the Royal Society.  The journal allowed scientists to share their thoughts and promote discussion.  Oldenburg’s insistence that the Transactions be published in the vernacular rather than Latin was significant as it made science more accessible.  Sound familiar?

We are having the same discussions today, but they are based around technology and, perhaps in some cases, driven by money. The journal publishing model has changed considerably since Oldenburg and it was not the focus of the talk so let us concentrate on the data.  Data are now largely digital.  Journals themselves are also generally digital.  The sheer volume of data we now collect makes it difficult to include the data with a publication. So should data go into a repository?  Yes, and some journals encourage this but few mandate it.  Indeed, many of the funding councils state clearly that research output should be deposited in a repository but don’t seem to enforce this.

Replicability – the cornerstone of the scientific method

Having other independent scientists replicate and validate your findings adds credence to them. Why would you as a professional scientist not want others to confirm that you are correct?  It seems quite simple but it is not the norm.  Boulton pointed us to a recent paper in Nature (Nature v483 n7391) which attempted to replicate the results of a number of studies in cancer research. The team found that they could only replicate 6, around 11%, of the studies.  So the other 81% were fabricating their results?  No, there are a number of reasons why the team could not replicate all the studies.  The methodology may not have been adequately explained leading to slightly different techniques being used, the base data may have been unobtainable and so on but the effect is the same. Most of the previous work that the team looked at is uncorroborated science.  Are we to trust their findings?  Science is supposed to be self-correcting.  You find something, publish, others read it, replicate and corroborate or pose an alternative, old theories are discounted (Science 101 time: “Null Hypothosis“) and our collective knowledge is furthered.  Boulton suggests that, to a large degree, this is not happening. Science is not being corroborated. We have forgotten the process on which our profession is based. Quoting Jim Gray:

“when you go and look at what scientists are doing, day in and day out, in terms of data analysis, it is truly dreadful. We are embarrassed by our data.”

What do we need to do to support, to do to advise, to ensure materials are available for our students, for our researchers to ensure they can be confident about sharing their data?  The University of Edinburgh does reasonably well but we still, like most institutions, have things to do.

Geoffrey looked at some of the benefits of open science and while I am sure we all already know what these are, it is useful to have some high profile examples that we can all aspire to following.

What value if not intelligent?

However, Boulton’s closing comments made the point that openness has little value if it is not “intelligent” so this means it is:

I would agree with Boulton’s criteria but would personally modify the accessible entry. In my opinion data is not open if it is buried in a PDF document. OK, I may be able to find it, but getting the data into a usable format still takes considerable effort, and in some cases, skill.  The data should be ready to use.

Of course, not every dataset can be made open.  Many contain sensitive data that needs to be guarded as it could perhaps identify an individual.  There are also considerations to do with safety and security that may prevent data becoming open.  In such cases, perhaps the metadata could be open and identify the data custodian.

One of the first questions from the floor focused on the fuzzy boundaries of openness and the questioner was worried that scientist could, and would, hide behind the “legitimate commercial interest” since all data had value and research was important within a university’s business model.  Boulton agreed but suggested that the publishers could do more and force authors to make their data open. Since we are, in part, judged by our publication record you would have to comply and publish your data.  Monetising the data would then have to be a separate thing. He alluded to the pharmaceutical industry, long perceived to be driven by money but which has recently moved to be more open.

The second question followed on from this asking if anything could be learned from the licences used for software such as the GNU and the Apache Licence.  Boulton stated that the government is currently looking at how to licence publicly-funded research.  What is being considered at the EU level may be slightly regressive and based on EU lobbying from commercial organisations. There is a lot going on in this area at the moment so keep your eyes and ears open.

The final point from the session sought clarification of The University of Edinburgh research data management policy.  Item nine states

“Research data of future historical interest, and all research data that represent records of the University, including data that substantiate research findings, will be offered and assessed for deposit and retention in an appropriate national or international data service or domain repository, or a University repository.”

But how do we know what is important, or what will be deemed significant in the future? Boulton agreed that this was almost impossible.  We cannot archive all data and inevitably some important “stuff” will be lost – but that has always been the case. 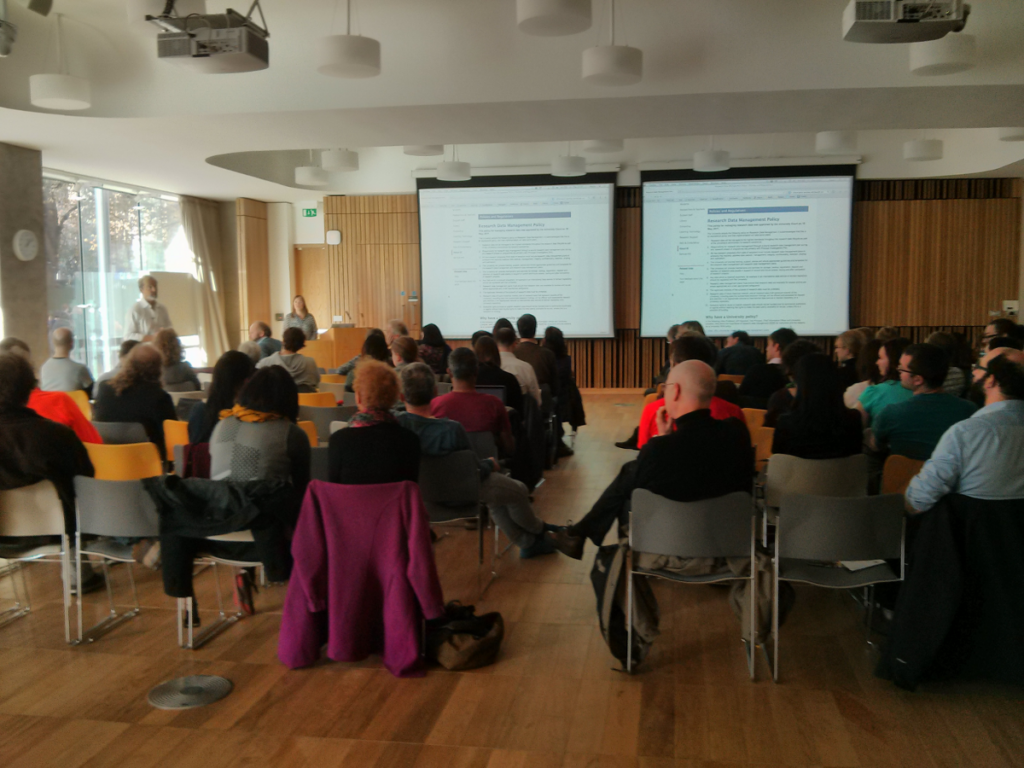 My Final Thoughts on Geoffrey’s Talk

An interesting talk.  There was nothing earth-shattering or new in it, but a good review of the argument for openness in science from someone who actually has the attention of those who need to recognise the importance of the issue and take action on it.  But instead of just being a top down talk, there was certainly a bottom up message.  Why wait for a mandate from a research council or a university? There are advantages to be had from being open with your data and these benefits are potentially bigger for the early adopters.

I will leave you with an aside from Boulton on libraries…

“Libraries do the wrong thing, employ the wrong people.”

For good reasons we’ve been centralising libraries. But perhaps we have to reverse that. Publications are increasingly online but soon it will be the data that we seek and tomorrow’s librarians should be skilled data analysts who understand data and data manipulation.  Discuss.

Some links and further reading: