Throughout his career as researcher, lecturer and finally Professor of Sociology, Tom Burns was a prolific and engaging writer of journal articles, lectures, conference papers and reviews. His works include references to philosophers and political thinkers (Max Weber, Karl Popper, Antonio Gramsci to name a few) and are peppered with wonderful imagery, gentle humour and acute observation. The titles of his works are delightful: Sancho Panza’s Grandmother; The Revolt of the Privileged; Models, Images and Myths. He interweaves his subjects of interest, frequently using the organisation of factories to explore social interactions and urban planning, and technological change to inform notions of community and social status.

“We did not feel that we had jettisoned decency for good and all, but that we had pocketed such things until the time came for employing them again”, Men and Barbed Wire

Tom Burns graduated from the University of Bristol with an English degree in 1933. A Quaker, he did not enlist in active service at the outbreak of war but volunteere

d with the Friends Ambulance Unit. Burns was captured in 1941 and spent almost three years as a POW in Germany. He wrote at least 3 pieces discussing his war time experiences, one in Finland before his capture – an unknown piece to which he refers in his collection of selected writings – Calamity Bay written while imprisoned, and finally Men and Barbed Wire, a raw and honest portrayal of a POW’s reaction to repatriation and memories of incarceration:

“…the great herd of men which had been driven through the streets of Kalamata on the morning of 30 April 1941 remained, for the most part, a herd. Dirty, unshaven, undisciplined, shiftless, grubbing continually for bits of food and cigarette ends, indecent, selfish”

“I met a large number of interesting people; many very funny things happened; there were many enjoyable times; a pleasant sort of easy friendliness existed; I had time to read; I had time to think”

Burns was working with the Bournville Village Trust and the West Midland Research Group, both concerned with post-war reconstruction, when he was appointed research lecturer at Edinburgh University.

His main research interest was in the organisational structure of industry, this being the subject of his book The Management of Innovation written with G M. Stalker and published in 1961. But he extended his findings to other branches of sociology, using them to explore and discuss social interaction, leisure time, and the organisation of family life.

His fascinating essay Cliques, Cabals, Confidants explores the behaviour and purpose of different groups found within the workplace and how they can be the force behind success and/or failure. Gossip, he writes, can be exchanged between colleagues or friends but be warned,  “it is always necessary to know with whom it is safe to gossip and with whom it is not.”

The manager of a firm is painted as an isolated figure, not a member of any clique or cabal, but often accompanied by a confidant “always available and correctly responsive for the direct expression of fears, doubts and desires“. Crucially however, “there is no mutuality between confidant pairs; merely a contract“.

In Friends, Enemies and the Polite Fiction, a companion piece to the above, Burns observes how easily members of an organisation can switch the way in which they interact with each other based on what particular role they have assumed at any one time; these different interactions can be justified because “we carry with us the capacity for acting out a number of roles, for occupying a variety of social positions“. He also includes an interesting discussion on the use of banter and irony as tools to navigate situations where an employee finds himself having to play and safeguard two distinct roles.

Of course, Burns was not just talking about the workplace. I have no experience of factories or multi national companies but the similarities with social interactions at the school gates is remarkable!

Burns was also interested in how social status is communicated by social acts and visual clues both within and outwith the workplace.

“It is the easiest thing in the world to attach the correct social weighting to looped window curtains as against straight hanging ones, to flights of china ducks against African masks, to an assortment of table lamps as against the central light….the significance lies in the values to which these displayed signs attach their owners [Non-Verbal Communication in Human Society].

In Cold Class War, he laments the middle class re-ignition of a class war despite having thought it put to bed with the end of the Second World War. “The proletarian peril is back with us again, irrational, hostile, nihilistic, getting more and more and doing less and less” and calls for better acceptance and understanding of differences:

“If we admit that within the workers situation there may be standards, judgements and codes of behaviour different from those of the middle class then there may be a possibility of understanding”

Industrialisation had, Burns writes in The City as Looking Glass, “separated work from leisure and workplace from home”. He was interested in the notions of community and the impact of urban development. The Planning Movement, he wrote in Neighbourhood Planning, had its roots in the revulsion against the industrial city and that “the millions of bright little gardens which now make up the greater part of the area of urban Britain are as much part of our way of life as tea and Sunday newspapers”.

However, he also hinted at a more sinister and uncomfortable side to suburbia:

” it is the vast random disorder of suburban development – the utter unrelatedness of the next bit of brick or concrete to anything else which dismays people. Then it was the octopus of ribbon development and urban sprawl; now it is the outrage of subtopia”.

These new “communities” now pose perpetual choices about whom to know, what to do and where to go.

His paper presented to the Manchester Broadcasting Symposium in 1976, The Meaning of Local Radio in Community, actually says very little about local radio but a lot about community and community studies.

Burns observed that “the awkward, indeed appalling, fact is that the more conflict ridden a place is, the more deeply involved in the community itself are the people who live there” and posed the alarming question – could the practice of broadcasters to lead with death and disaster be an attempt, albeit unconscious, to awaken our sense of community?

Latterly Burns conducted research within the BBC, again he was interested in organisation but also in mass communication and the role of state broadcasting. In The Politics of Broadcasting: The BBC and the British Government he lists the many times government ministers, left and right, have accused the BBC of, in the words of Norman Tebbit, “bias, incompetence, low professional standard or simple error”.  It would be fascinating to know what Tom Burns would have made of the current political climate’s impact on society, industry, communication and community.

The following publications can be found in the University Library:

The Management of Innovation, Tom Burns and G.M. Stalker, 1961

For the last 20 years of his life Tom Burns worked on a book on Organisation. It was never finished. Several early drafts exist within the material being catalogued as part of this project. The most recent draft can be accessed online at: http://www.sociology.ed.ac.uk/tomburns/ 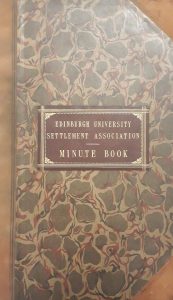