7 June 2019 marks the centenary of the marriage of Edwin and Willa Muir, one of Scottish literature’s great creative partnerships. Acclaimed in their own right as poet and novelist respectively, they worked together as a translating team to bring the novels and stories of Franz Kafka to an English-speaking audience.

At Gen. 1957/4, we hold five letters sent by Edwin to Willa, while she was recovering from a near fatal hospital operation in spring 1954. Edwin, an Orcadian by birth, and Willa, the daughter of two Shetlanders, privately addressed each other with the Norse ‘thu’ rather than standard English ‘you’. In a letter of 13 March, Edwin sends Willa a ring as a birthday gift, marking ‘a new engagement for a new morning’. He writes: ‘I am filled with joy at the thought that thu has been given back to me, and that thu has come up from thy darkness like another Persephone to a new Spring […] I love thee beyond expression, more and more and more.’

In another, undated letter, where he addresses Willa as ‘my darling’ and ‘my peedie lamb’, Edwin laments: ‘Thu said before going away that now I could have some peace – silly words, thu didna ken; for what’s in the house now, without thee, is not peace, but something that needs thee to turn it into peace’. He longs for her return: ‘And when thu’s well again, whit a time we will have, and how happy we will be. God bless thee, and me through thee. And all my love to thee, over and over again.’ Letter from Edwin to Willa Muir

In his autobiography, Edwin Muir described his marriage to Willa as ‘the most fortunate event in my life’ (p. 154). His biographer, P. H. Butter credits Willa with giving Edwin the courage to abandon a secure but unfulfilling clerical post and to launch himself on the literary world. She created ‘the conditions in which his genius could flower’ (Edwin Muir: Man and Poet, p 52). Willa provided not only ‘love and loyalty’ but an ‘intellectual companionship’ and a ‘toughness’ which ‘kept him in touch with the earth and with common humanity’ (p. 180). While Edwin Muir’s critics and biographers have, perhaps unsurprisingly, characterized Willa as a self-sacrificing Muse, the recent republication of her novels Imagined Corners and Mrs Ritchie has led her to being recognized as a major contributor to Scottish and European modernism.

Another document in our archives shows that Willa could be critical of her husband’s work. At Gen. 1972, we hold a copy of Edwin’s early essay collection Latitudes (1924). The first seven essays and the last have extensive marginal revisions in Edwin’s hand. A letter to Norman MacCaig (22 May 1958), quoted in Butter’s biography, suggests that Edwin revised the essays for an unpublished, expanded edition of his Essays on Literature and Society, on which he was still working at the time of his death in 1959. Muir confesses to MacCaig that ‘I hadn’t read the book I should say for thirty years, and it was a humbling experience. So much mere nonsense combined with overweening confidence, arrows clumsily notched and shot mainly into nothingness. And yet there were things here and there, choice forlorn fragments, that seemed to be worth doing something with again’ (pp. 92-93).

The remaining essays in the volume have occasional marginal notes in Willa’s hand. It is unclear when these where added. It may, in fact, be that they postdate Edwin’s death. In a letter of 16 April 1961, Willa tells David Daiches that she is editing a (never published) collection of Edwin’s essays for Chatto & Windus, and it may be that her comments date from this period.

Sometimes her comments simply read s ‘Hear, hear’ or ‘Ha!’, but other comments are more pointed, particularly when Edwin indulges in his youthful passion for the Nietzschean superman. When Edwin writes ‘For man is ineluctably anthropocentric; he is constituted by evolution and by himself the centre of reference for all created things; he must give meaning and his meaning, to chaos, evil, “nature”’ (p. 170), Willa retorts ‘and what about art’. When Edwin proclaims that ‘The spectacle of man, the most intrepid, rash, arrogant and dauntless of all creatures, who has miraculously half-conquered the planet, becoming suddenly pious towards nature, by violating which he has aggrandized himself , sprawling on all fours before the enigma, which, if he is to fulfil his destiny—the mastery over all life—he must solve, must be the strangest and the most shameful which the gods have ever witnessed’ (p. 193), Willa simply writes ‘Oh dear, Edwin!’ 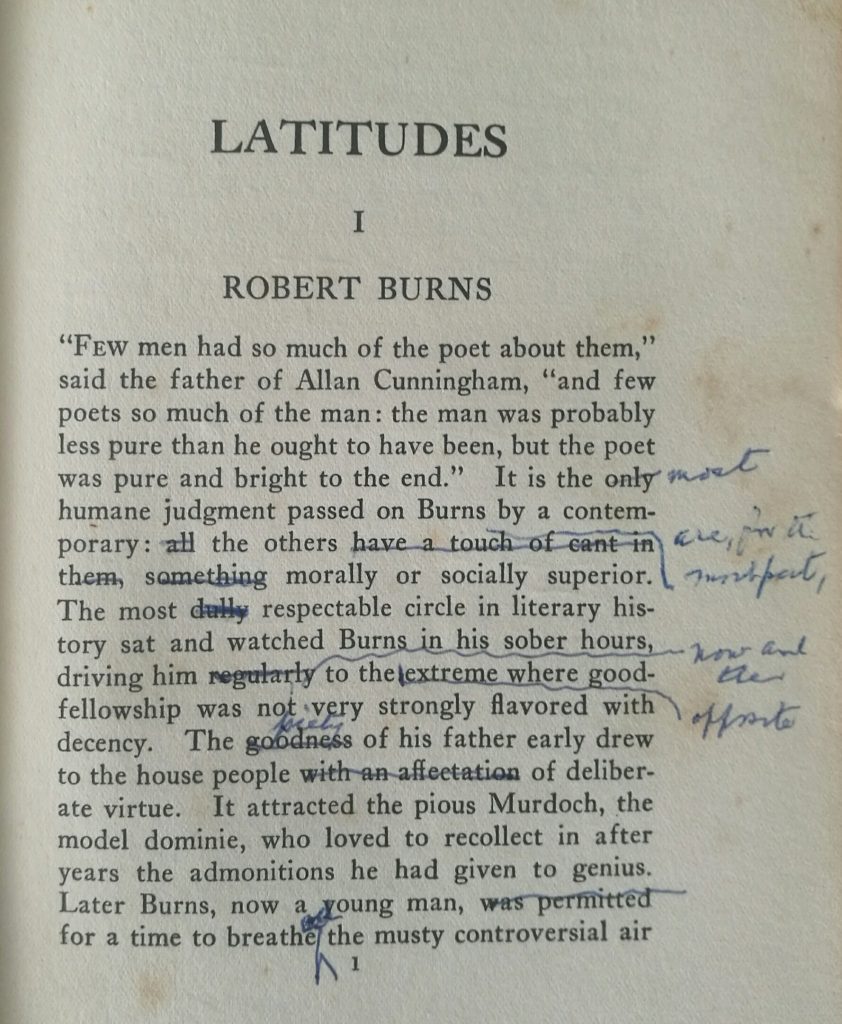 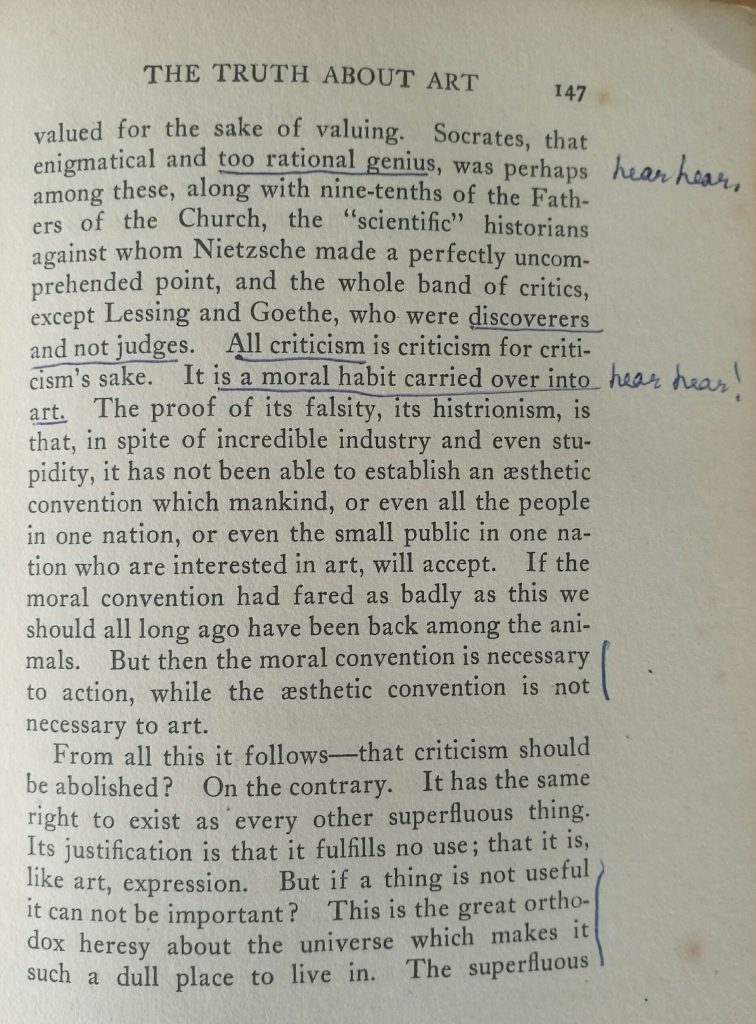 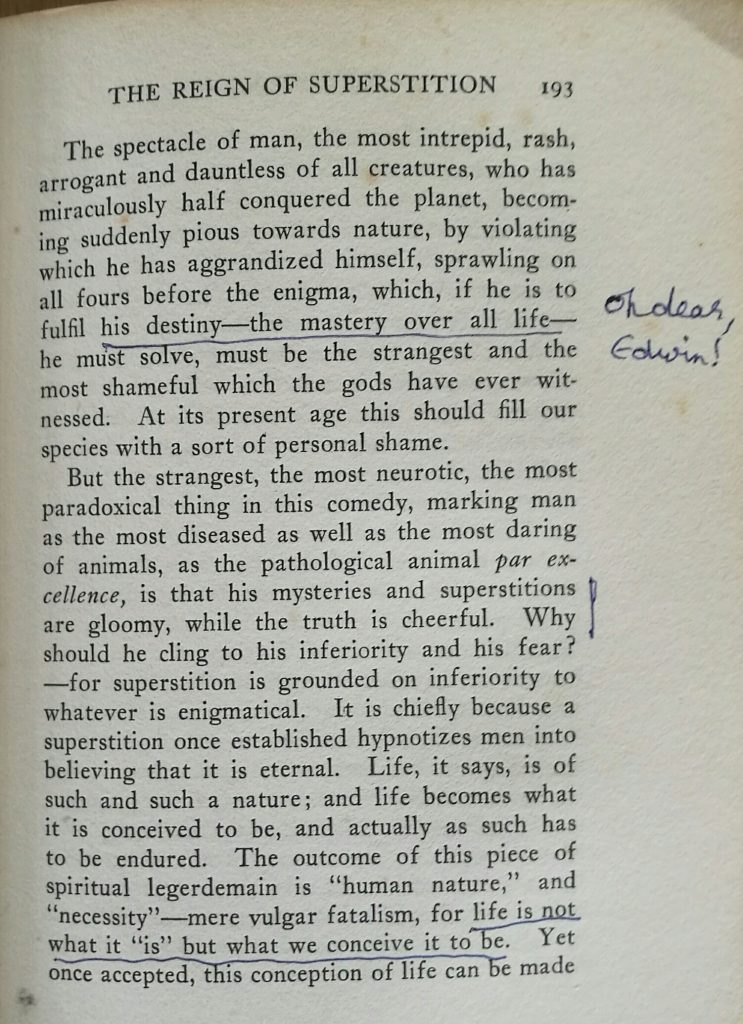 Our archives also contains a number of significant second-hand accounts of the Muirs’ marriage.

At E87.47, there is a brief but vivid account of Edwin Muir’s spell as Warden of Newbattle Abbey College (1950-55), an adult education institution in Midlothian. It is included in a letter (29 January 1987) to former Edinburgh University Librarian, Brenda Moon, from Margaret McLean who was the college administrator at the time of Edwin’s tenure. She affectionately recalls ‘Edwin Muir, the gentle absent-minded poet’ and ‘his strong-minded Willa who protected her husband from the pressures and pinpricks of the outside world as fiercely as a mother bird her chick’. She recalls that ‘the Muirs rose late and kept late evening hours but they liked to rest in bed in the afternoon since neither of them enjoyed robust health’. If disturbed, ‘they would both come to the door like two sleepy children, Willa in her pink flannel nightdress and Edwin with a silk coat over his pyjamas’.

They took lunch and sometimes supper with the students. Margaret MacLean recalls that Willa ‘could on occasion indulge in a little mild vulgarity’. She once butted into a conversation between Edwin and a young writer, saying: ‘I wonder what it is about peas that makes one pip at the rear?’ Nobody replied but Edwin ‘looked a trifle embarrassed’ and when ‘Willa started to repeat the remark more loudly, he silenced her by making a quick trenchant sentence about a book he was reviewing’.

Overall, though, there was ‘an enviable peacefulness in the pattern of their daily lives’ and it was a joy to see ‘two people devoted to each other with a oneness which gave them a kind of inner strength ‘. She can still picture them ‘sitting quietly hand in hand on the wide Holland-covered sofa in their lovely drawing-room overlooking the formal garden and the river Esk’.

At Gen 2180/4, we also hold a memoir of the Muirs in the Second World War years by the writer Morley Jamieson, whose wife Flora served as the couple’s housekeeper in Edinburgh. Besides bearing further witness to the strength of the Muirs’ marriage, Jamieson provides vivid pen-pictures of university figures like Max Born and A. A. Aitken, both close friends of the couple.

Perhaps, however, the most valuable recollections of the Muirs in our archives are in the Papers of George Mackay Brown (Coll-50). Brown attended Newbattle Abbey in 1951-52, and believed that ‘without Edwin Muir, any seeds of poetry in me would have died through sheer discouragement’. In ‘Edwin Muir at Newbattle’ (Gen. 1777), Brown recalls his first meeting with the Muirs in his native Orkney in summer 1951. He was invited to have tea with them at the Stromness Hotel by way of an informal interview for a place at Newbattle. He was struck by Edwin’s ‘remarkable’ face, full of ‘gentleness and serenity’, but noted that he was not a ‘brilliant conversationalist’ unlike Willa, ‘a marvellous talker, brimming with wit and gaiety’. When he arrives at Newbattle, he again finds Willa to be ‘a marvellous host, full of gaiety, humour and kindness’. Edwin, meanwhile, ‘sat quietly in a corner, smoking and sipping wine’ but ‘every now and then his eyes would blaze with delight at something that had been said’. Elsewhere, Brown characterized Edwin and Willa as respectively ‘the introvert, looking into the deep pool of silence where immortal things are sometimes reflected—and the extravert [sic], reacting immediately and vividly to the daily pressures and stimuli of life’ (MS 3114.2.1.2).

We also hold 38 letters from Edwin Muir to George Mackay Brown (Gen 767/7), which bear witness to Muir’s endless encouragement of the younger writer and his tireless efforts to have him published. Muir also tells Brown that when Willa was hospitalized in 1954, he was unable to write ‘anything for about half a year because of my anxiety about her’ (19 July 1954). But now that she is home, ‘a poem or two is beginning to come again’. Brown must have drawn on these letters when writing perhaps his most significant tribute to the Muirs, the unpublished one-man play Edwin Muir and the Labyrinth (MS 2844.4.2), which he wrote in 1987 for his friend John Broom to perform at the Edinburgh Festival Fringe. In this monologue, Edwin Muir looks back over his life while preparing to deliver a lecture at Newbattle. It contains some of Brown’s most lyrical celebrations of the Muirs as a couple. Recalling his time as a friendless and alienated clerk in Glasgow, Muir asks ‘Where would you be now Edwin, without her? Lost forever (f.4) in the labyrinth. She saved your life and your reason, that dear one. She waited for you at the gate-Ariadne—in the sun. She took your hand then you were free.’ (ff. 3-4). Their union brings ‘love and light and freedom’, a full ‘richness of life’ (f. 21). Now, in their old age, despite bodily pain, they ‘drink in peace from the golden bowl’ (f. 4). 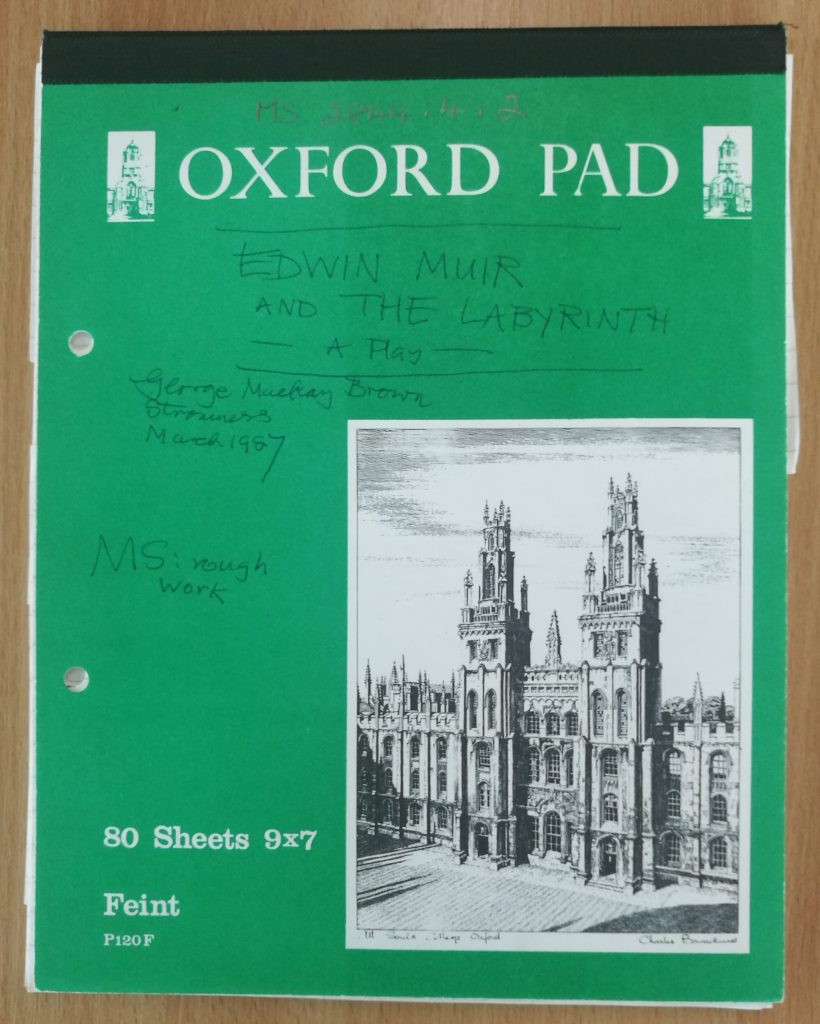 Manuscript of ‘Edwin Muir and the Labyrinth’ 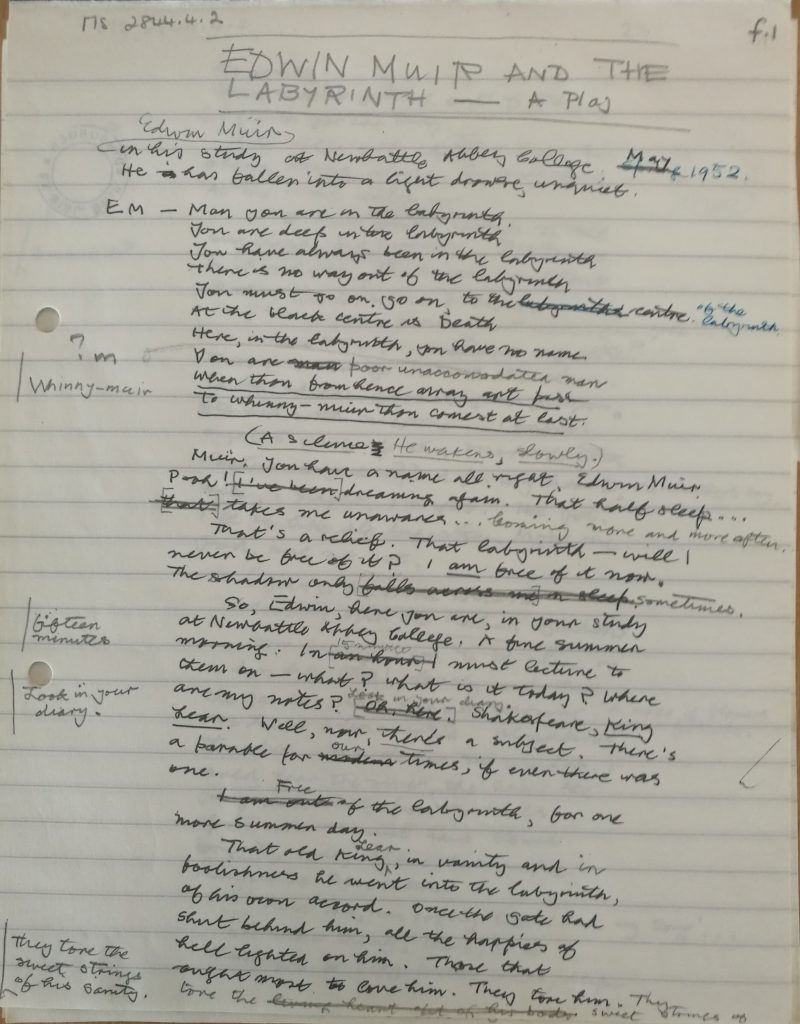 First page of ‘Edwin Muir and the Labyrinth’

For a full description of our Edwin Muir holdings, see:

We do not have a discrete collection of Willa Muir papers, but there are letters from Willa in the Papers of George Mackay Brown, David Daiches, Hamish Henderson, Toms Scott, and Vernon Watkins. See here for further details: