This week we have the first instalment of a two-part series by Projects Conservator Mhairi Boyle. Mhairi spent April 2022 working on The Witness, a collection of Edinburgh-based newspapers held by New College Library.

As a child I remember the local tabloid newspaper being delivered every morning, and my dad examining the daily happenings over his morning coffee before heading off to work. At the time I was more interested in the horoscopes and agony aunt sections. Weekends were a more relaxed affair, with a much larger (and more sophisticated) newspaper that barely fit onto the kitchen table. Considered ephemera, the newspaper was read once then discarded, with little thought lent to the matter. 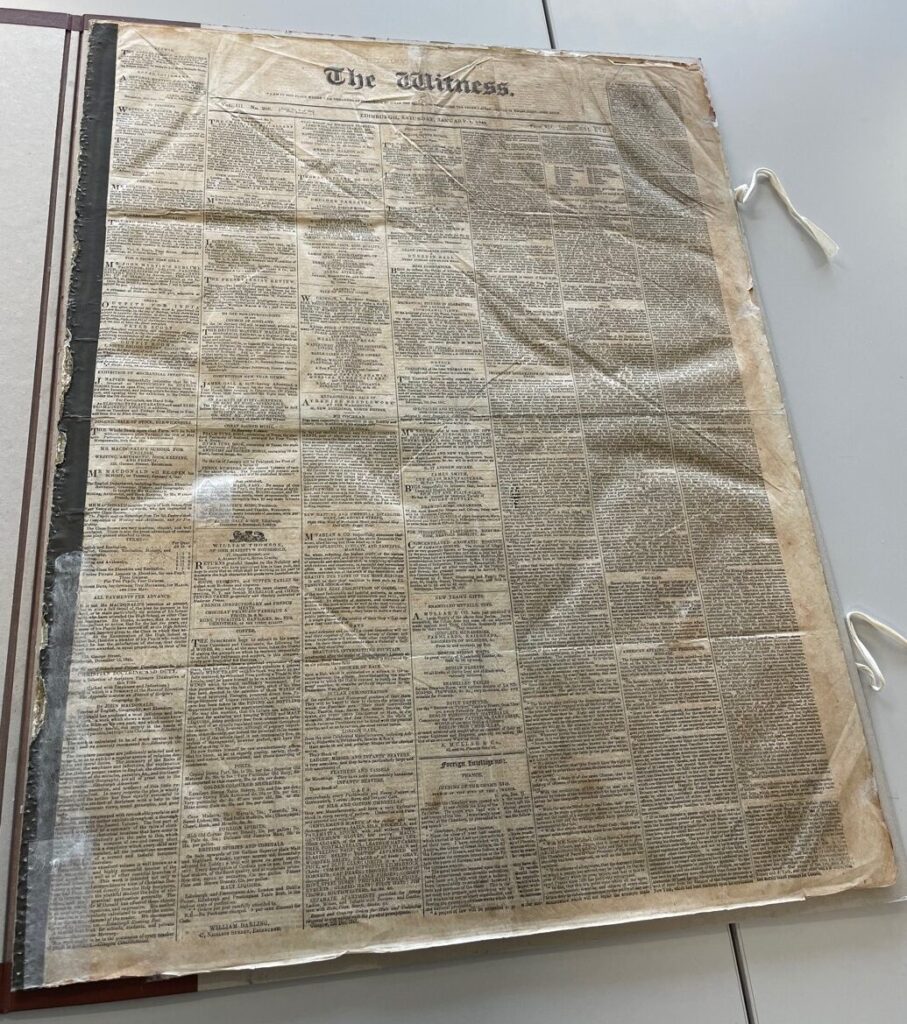 The January 1842 copy of The Witness.

These days I rarely, if ever, purchase a physical newspaper. With the reign of the Digital Age, the news is accessible through the swipe of a fingertip via various apps and videos all shown on a tiny cellular screen. Critical stories are updated by the second with live news feeds, which means you can scroll to your hearts content on a regular basis.

I hadn’t given the modern consumption of news much thought until I was asked to assess the condition of a collection of newspapers belonging to the School of Scottish Studies. The Witness collection comes in two formats: there are 23 folders of partially loose issues which appear to have been removed from bound book volumes, and 26 much larger volumes. As part of a larger digitisation project which aims to make The Witness accessible online, I was asked to assess the condition of the loose monthly volumes prior to them being sent off to an external company to be scanned. Because they are so large, it takes two people to produce one item at the New College Library. Digitising The Witness will enable ease of access to all readers and reduce the need for handling such large items. I met Senior Collections Manager Katharine Richardson at the University Collections Facility to assess the newspapers. 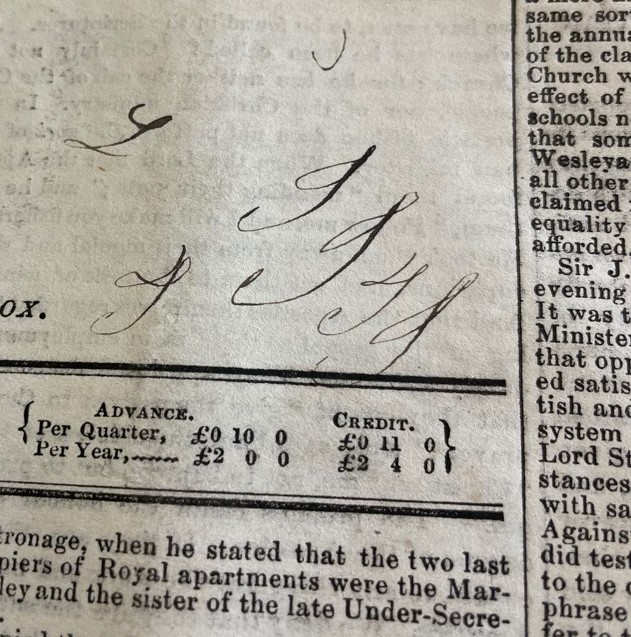 Why is the preservation of these newspapers important? Historic newspapers are physical encapsulations of everything from historic world-changing events to opinion columns which echo the thoughts and feelings of communities from different eras. The Witness is an Evangelical Christian newspaper which was issued twice-thrice weekly from January 1840-February 1864.

The 23 loose monthly items vary from poor to excellent condition. The dates of the newspapers range from January 1842 to October 1843. During this period, a transition was being made from using cotton rags to make paper to using wood pulp, an inexpensive alternative. Wood pulp paper tends to become yellowed, brittle, and crumbly over time, whereas cotton rag paper tends to be strong and better-preserved. Thankfully The Witness was printed on a good quality cotton rag paper, which means that despite the wear and tear incurred through a century of use, the paper is still of a good and sturdy quality. 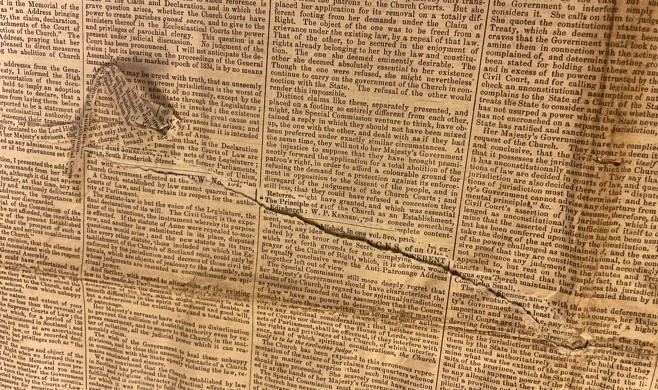 A large tear obscuring the text block, and some split areas where the paper has previously been folded.

The most concerning issues with the newspapers were tears encroaching into the text block, areas of weakness due to being folded, and fragile pages where the papers had previously been bound together into one area. 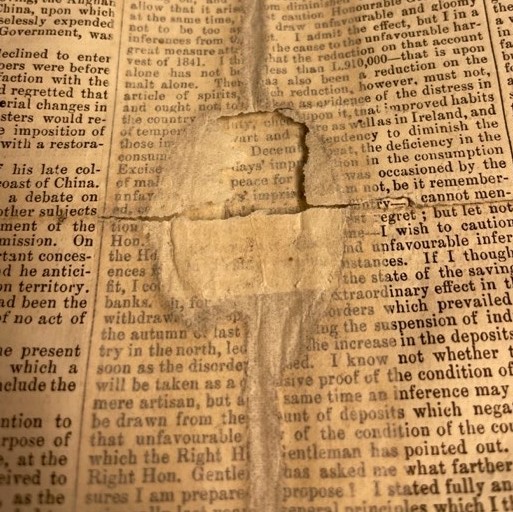 An interesting (and challenging) aspect of the condition of the collection is the damage caused by historic repairs. Conservation is a constantly evolving profession with new techniques and adhesives being produced every year, which means that occasionally my job involves removing historic repairs if they are causing damage to objects. Many of the newspapers had old repairs administered with an unknown adhesive, which had failed and split over time. 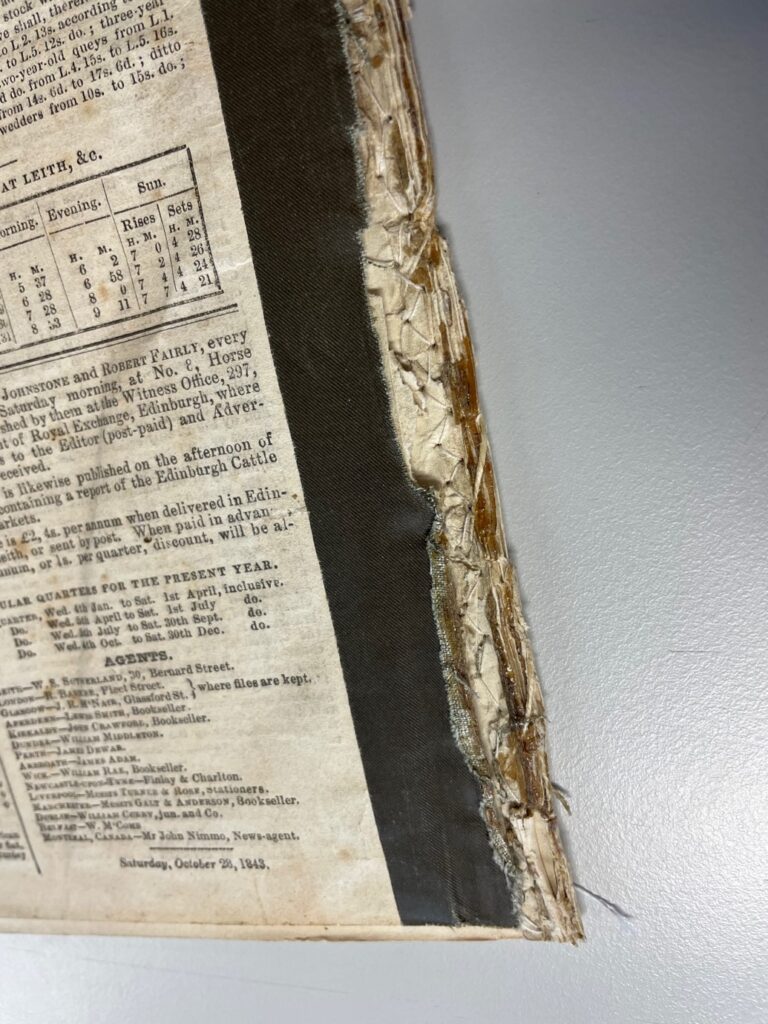 Two layers of binding: the original adhesive is yellowed and hardened, and the single thread was added later on.

In addition to this, a well-meaning repairer had also taken the time to painstakingly individually ‘bind’ each disbound newspaper with a single piece of thread. Unfortunately, this thread has caused issues regarding the structural stability of the newspapers, causing areas of tension and fragmentation throughout.

After surveying the newspapers, I formulated an action plan, which included a few ethical dilemmas and consultations along the way. Digitising the newspapers involves pressing them under flat scanners, which meant that they required stabilisation through remedial conservation treatment. The ethical questions involved, and the remedial treatment of the newspapers, will be discussed further in Part 2 of this blog series: coming to an online news outlet near you soon!