‘They do it yet!’: The surprise of Borders ba’.
Dr Emily Lyle

When I was talking with an old man in Denholm about customs, I had been reading about the ball game there and I asked him if he remembered them playing. I was totally surprised when he told me ‘They do it yet!’, and that was the beginning of the recording for the archive of this living tradition of the Borders for, next time the game was played at Denholm, I was there with the archive photographer, Lesley Davenport. Before the game, she took photos of the balls that were displayed in the windows, and the surprise here was that the game was played with multiple balls which were decorated with ribbons. The balls were provided by couples who were married or had celebrated an anniversary in the previous year. 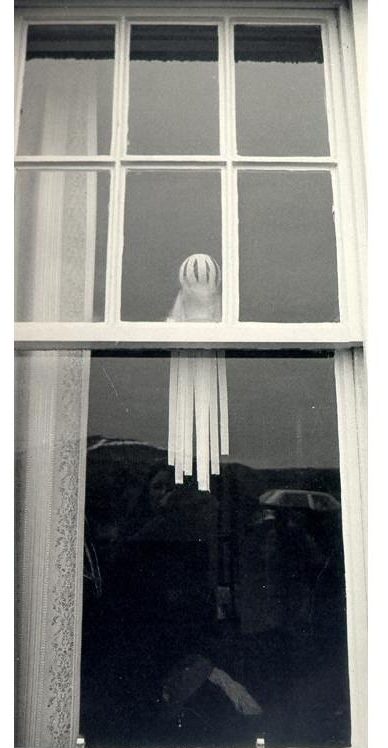 1 A silver wedding ball with white ribbons at Denholm.

The game is handball and when each ball is thrown up to start play, the person throwing announces the sum that will be paid when the ball is returned, like ‘There’s £5 on it!’. We watched the first ball being thrown up in Denholm that day and then observed the players lying in a heap (the ‘strow’) for half an hour or so until we had to leave for an evening engagement in Edinburgh. 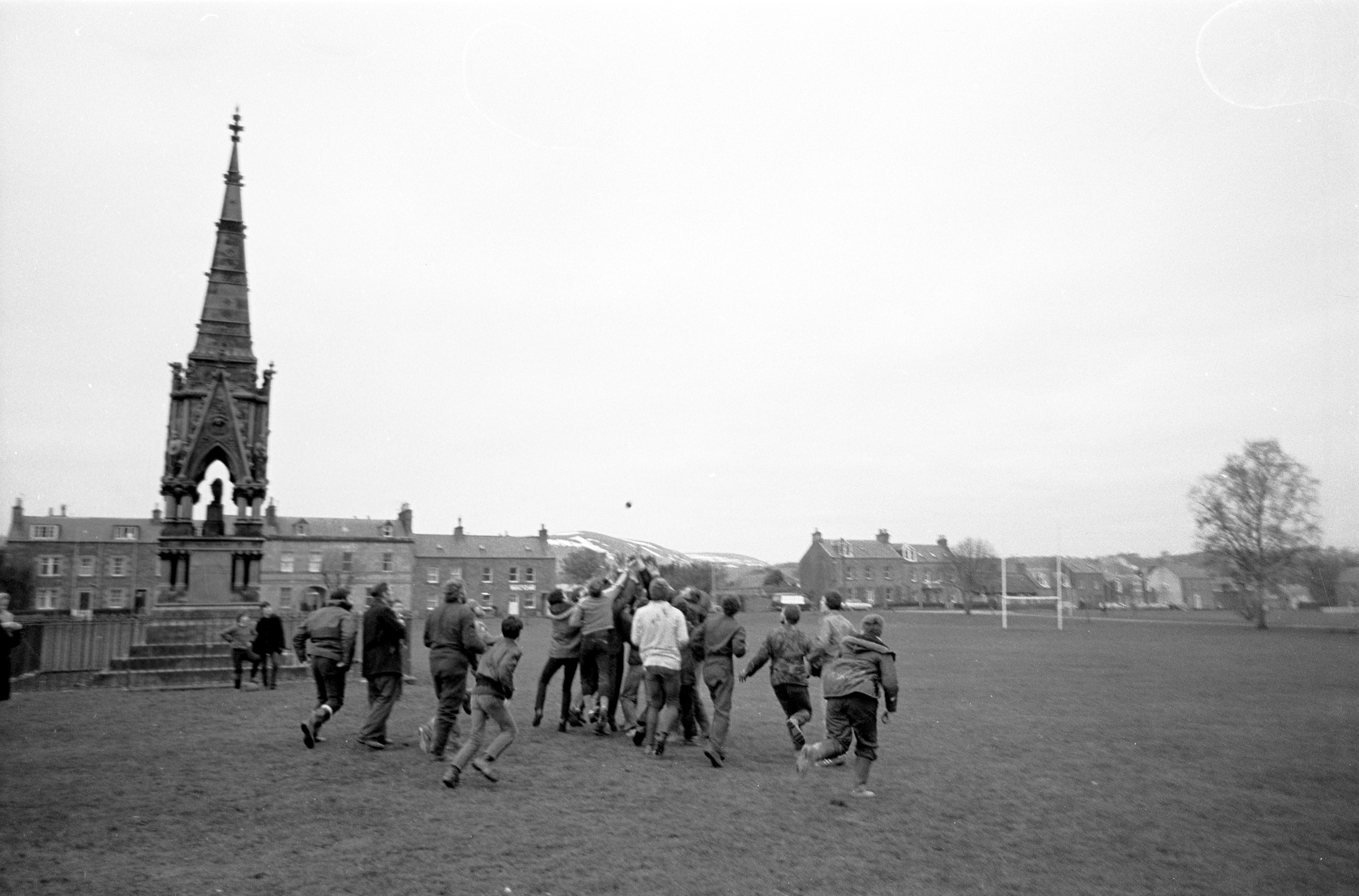 3. The strow at Denholm.  This shows a heap of men on the ground with others standing round them.

The game does not require daylight but can continue after dark. 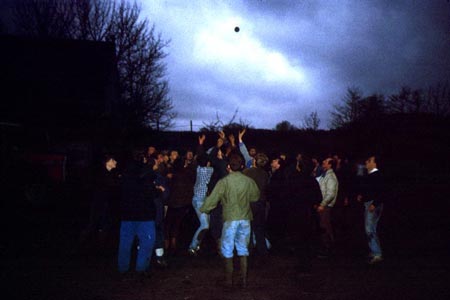 4. Playing in the twilight at Hobkirk.

The players are not distinguished by team colours. They are divided by geographical halves into ‘Uppies’ and ‘Doonies’ and they know each other. The goals, called ‘hails’, are natural or built features that can be more than a mile apart. The players do not drive the ball into the opposite hail but bring it into their own hail 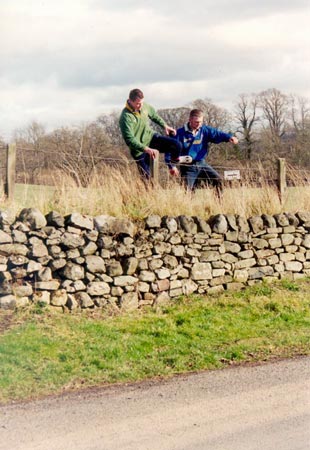 5. A Doonie player at Ancrum returning after hailing the ba’ over the dyke that forms the Doonie hail.

After a ball is hailed, another is thrown up, but not all balls reach the hails during play for they can be hidden (‘smuggled’) in such places as a milk churn, a rabbit burrow, or the player’s clothing, deliberately worn loose for this purpose. 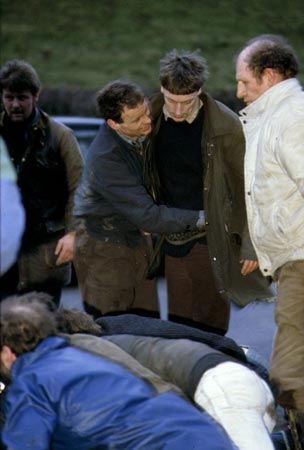 6. A player at Hobkirk being searched for a smuggled ba’.

When a player successfully smuggles a ba’, he is expected to take it to a hail before claiming the payment put on it and he does this when the action of the game is elsewhere. 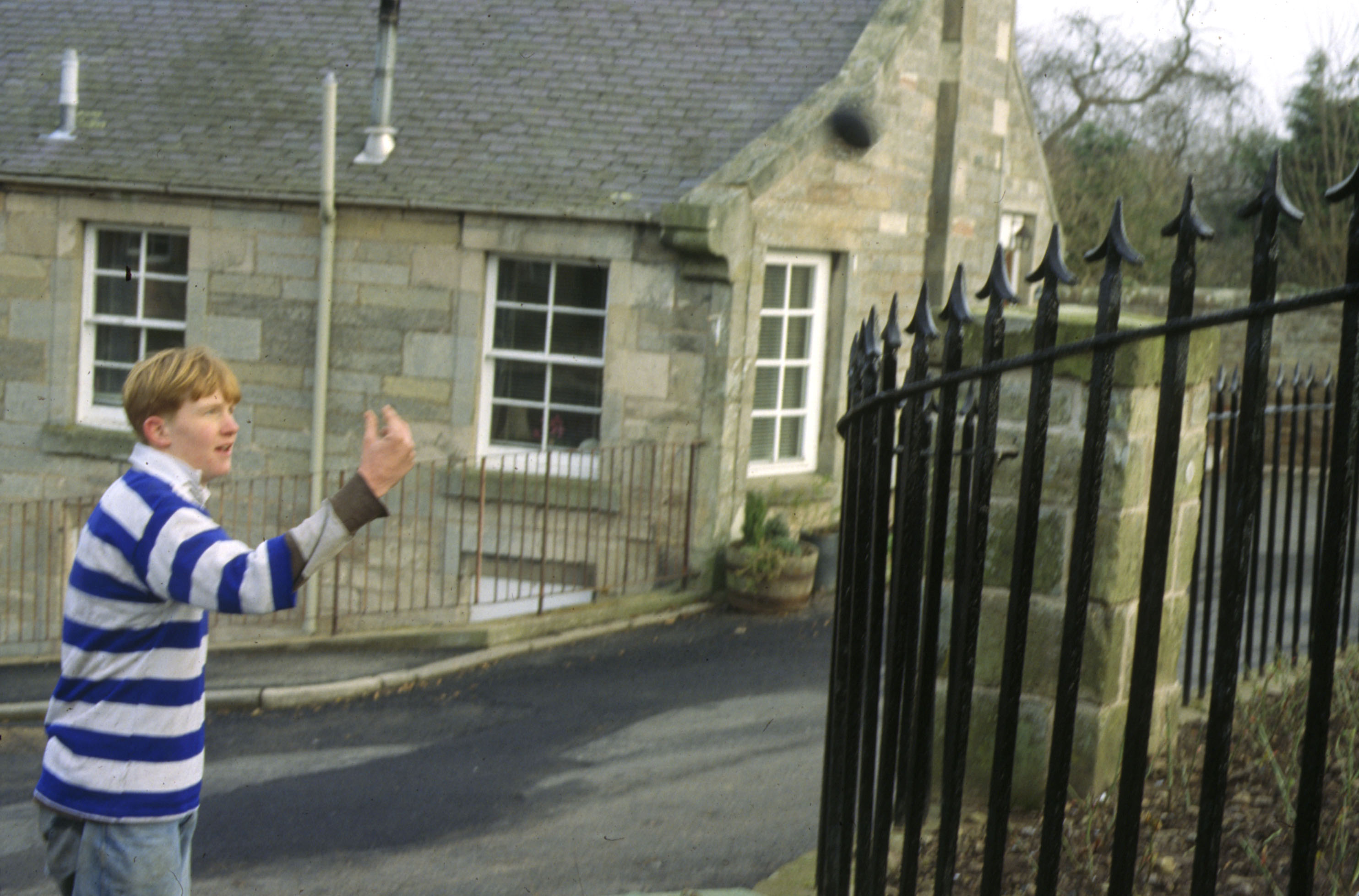 7. A player at Jedburgh hailing a smuggled ba’ at the Uppie hail.

In Jedburgh, the game is played in the streets of the town and the windows are barricaded to prevent damage. 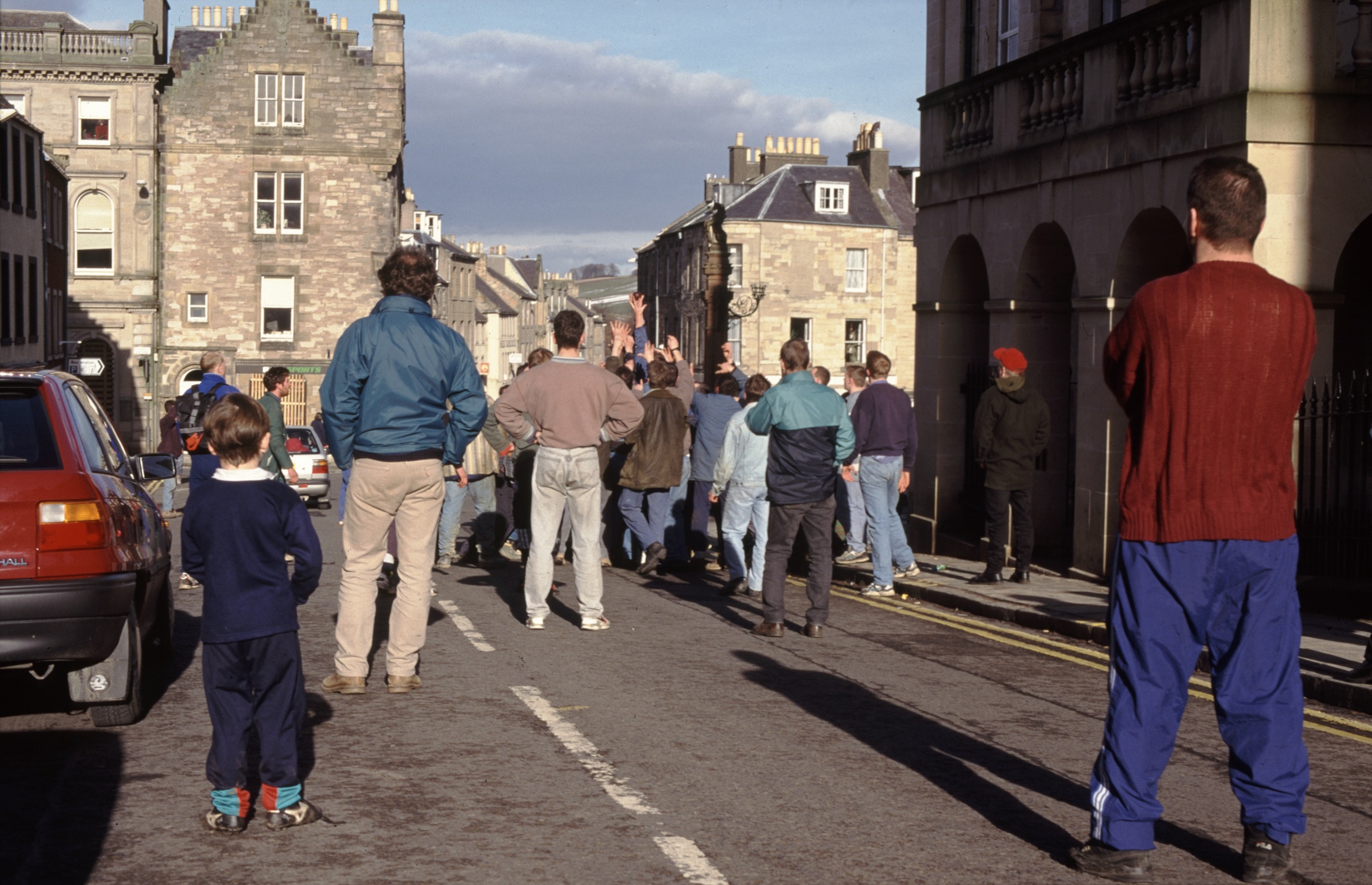 8. Players in a street in Jedburgh. 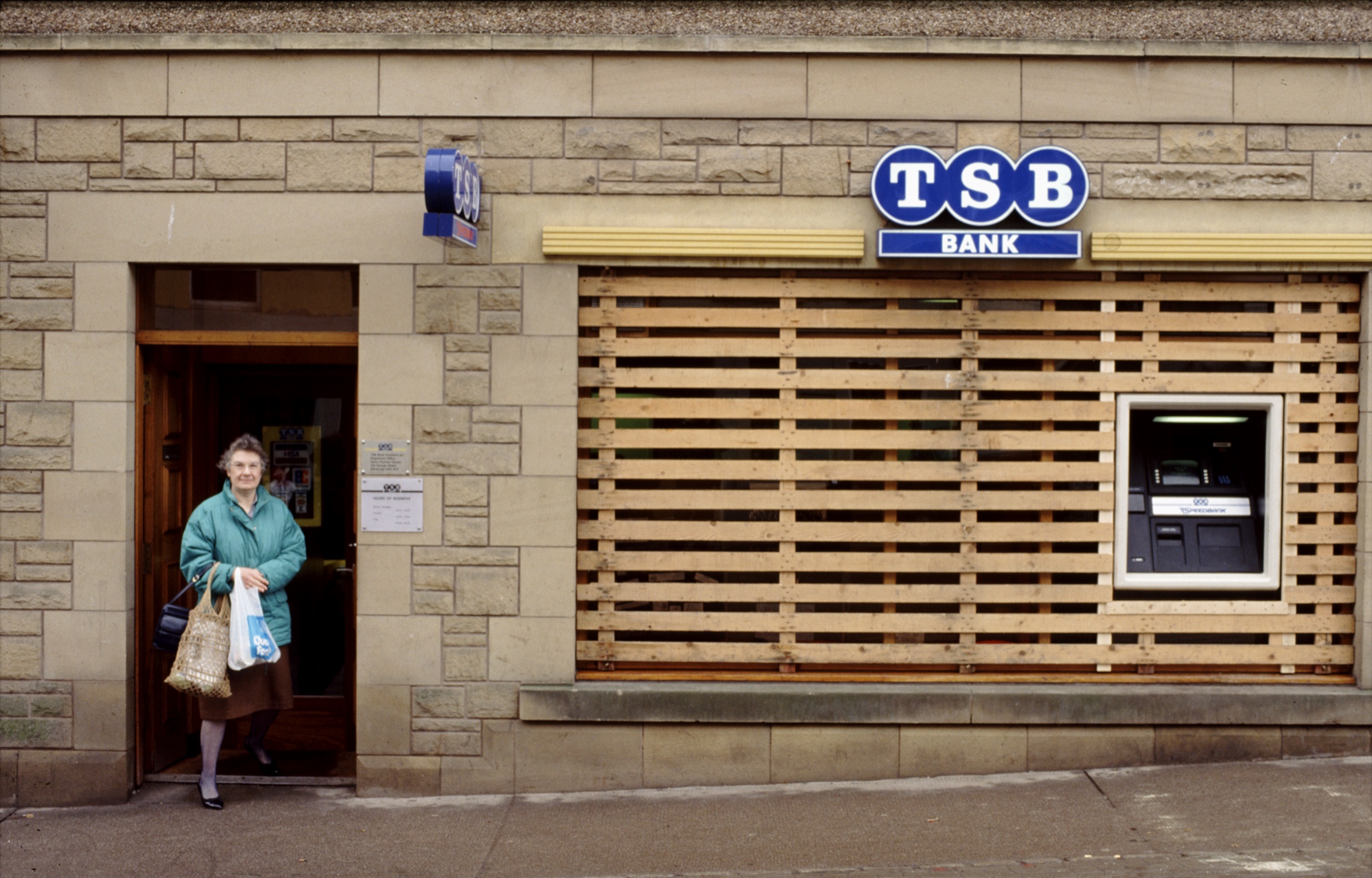 9. A boarded-up window in Jedburgh. 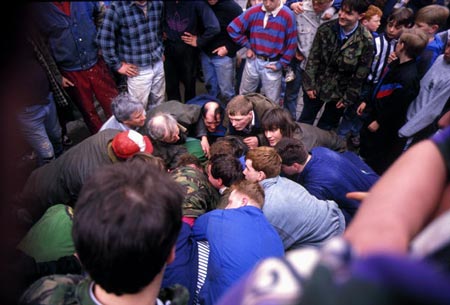 Sometimes there is a separate boys’ game before the men’s game. 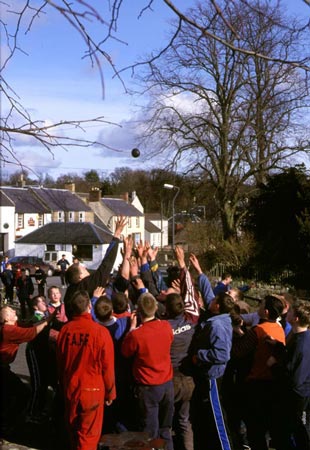 In Lilliesleaf  the game is played in the fields by school children. 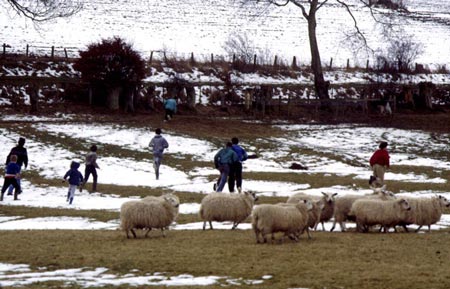 12. Children playing at Lilliesleaf in the snow.

Visitors can take part in these games and are Uppies or Doonies depending on the direction from which they come.

The cluster of games in these locations takes place on various dates following the first new moon after Candlemas (2 February) and it is always very cold. The game that was played at Duns ceased in the nineteenth century when there was a snowstorm one year and, when it was resumed in the 1940s, it was as part of the town’s summer festival with barrels in the town square as hails. 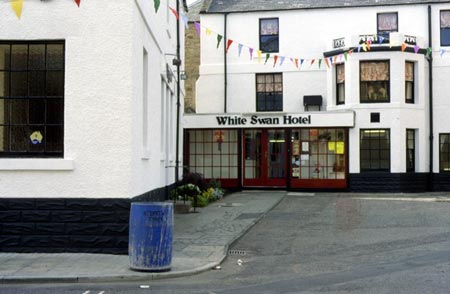 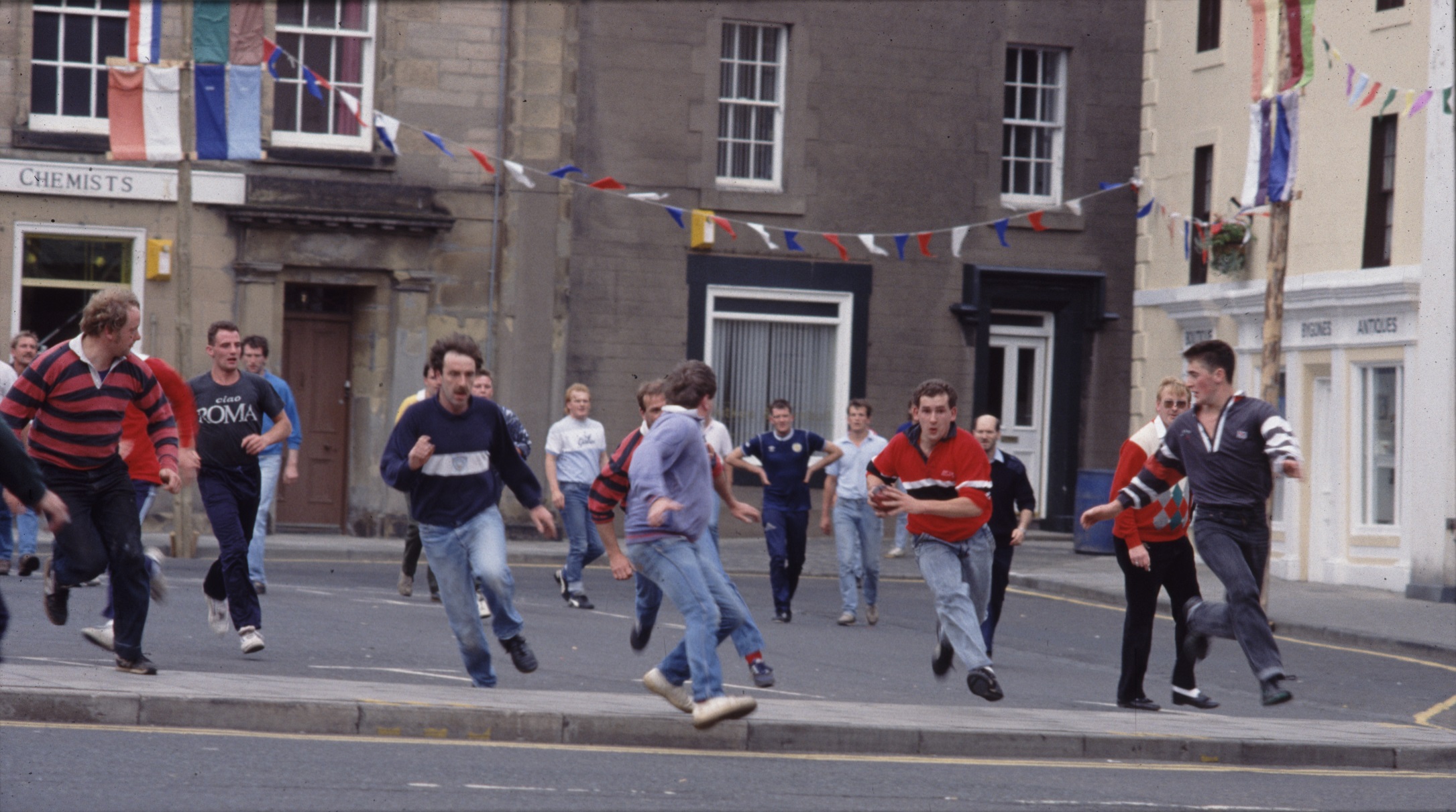 14. Players running through the square in Duns.

The game is generally played at a specific time of year but its early connection with weddings is preserved at Melrose where the game is played after the marriage ceremony. The ball has been updated to a Rugby ball. 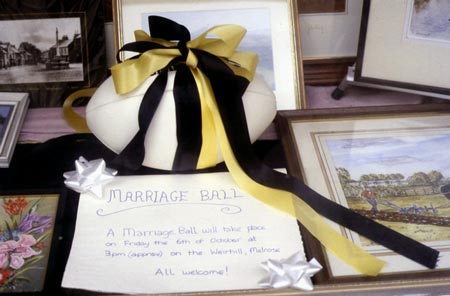 15.  An announcement of a wedding ba’ in a shop window in Melrose.

If you didn’t already know about the Borders ba’ game, you may have found all this as surprising as I did!

Dr Emily Lyle is an Honorary Fellow in Celtic and Scottish Studies and has been with the department since 1970. Her main areas of research have been Scottish songs and customs and Indo-European mythology.

Please do not reproduce without permission

All images held at (C) The School of Scottish Studies Archives.