The Library has access to these 7 databases until 12th July 2023.
They can be accessed from our E-resources trials.
They can also be accessed via the Digital Primary Source and Archive Collections guide or Newspapers, Magazines and Other News Sources guide, as appropriate.

So what do we now have access to?
(In alphabetical order)

American Fiction, 1774–1920 contains more than 17,800 titles and is comprised of prose fiction written by Americans from the political beginnings of the United States through World War I. It gathers extensive content in one place and allows researchers to explore the development of American literature in a changing culture through novels, short stories, romances, fictitious biographies, travel accounts, and sketches. The digital collection is based on authoritative bibliographies including Lyle H. Wright’s American Fiction: A Contribution toward a Bibliography, widely considered the most comprehensive bibliography of American adult prose fiction of the eighteenth and nineteenth centuries, and Geoffrey D. Smith’s American Fiction, 1901-1925: A Bibliography.

Archives of Sexuality and Gender: Inernational Perspectives on LGBTQ Activism and Culture 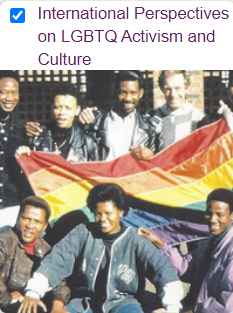 Archives of Sexuality and Gender: International Perspectives on LGBTQ Activism and Culture examines diversity in underrepresented areas of the world such as southern Africa and Australia, highlighting cultural and social histories, struggles for rights and freedoms, explorations of sexuality, and organizations and key figures in LGBTQ history. It insures LGBTQ stories and experiences are preserved. Among many diverse and historical 20th century collections, materials include: the Papers of Simon Nkoli, a prominent South African anti-apartheid, gay and lesbian rights, and HIV/AIDS activist; Exit newspaper (formerly Link/Skakel), South Africa’s longest running monthly LGBTQ publication; Geographic Files, also known as “Lesbians in…” with coverage from Albania to Zimbabwe; and the largest available collection of digitized Australian LGBTQ periodicals.

Note that the Library already has access to the three other modules (Parts I-III) of the Archives of Sexuality and Gender database. These can be accessed from the Digital Primary Source and Archive Collections guide or the Databases A-Z list.

Part VI of British Library Newspapers adds additional titles published in Ireland in the late eighteenth, across the nineteenth and during the early twentieth centuries. A significant number of these are national publications but many are more regional from cities such as Dublin, Cork and Galway as well as more rural towns like Waterford, Tuam, Ballinasloe, and Birr. It will facilitate a range of scholarship across Irish Studies and British history, allowing researchers from the variety of disciplines to access several the most formative and informed newspapers and periodicals that illuminate various aspects of Irish history, society, economy, politics and religion. Key topics include nationalism and Irish independence; Fenianism; The Roman Catholic Church; Irish diaspora; establishment of the Land League; the Irish literary revival; and sport and leisure.

Note that the Library already has access to Parts I-V of the British Library Newspapers. These can be accessed from the Newspapers, Magazines and Other News Sources guide or the Databases A-Z list.

A complete online, fully searchable facsimile, the Financial Times Historical Archive, 1888-2021 delivers the complete run of the London edition of this internationally known daily paper, from its first issue through 2021. Every article, advertisement, and market listing is included — shown both individually and in the context of the full page and issue of the day. Each item has been subject- or topic-categorized for fast retrieval and review.

Founded in 1903, the Mirror plays a pivotal role in the history of journalism. Peaking in 1967, with a daily circulation of 5.25 million, the newspaper has had a history full of highs and lows. Today, it is the only mainstream left-wing tabloid remaining in the UK. Gale’s Mirror Historical Archive, 1903-2000 features more than 800,000 pages of brand-new, full text searchable, scans of the complete run of the Mirror from 1903-2000, including the Sunday Mirror.

Slavery and Anti-Slavery: A Transnational Archive is devoted to the study and understanding of the history of slavery in America and the rest of the world from the 17th century to the late 19th century. Archival collections were sourced from more than 60 libraries at institutions such as the Amistad Research Center, BibliothÃ¨que nationale de France, the National Archives, Oberlin College, Oxford University, the Schomburg Center for Research in Black Culture, and Yale University; these collections allow for unparalleled depth and breadth of content.

Part II: Slave Trade in the Atlantic World charts the inception of slavery in Africa and its rise as perpetuated on both sides of the Atlantic Ocean, placing particular emphasis on the Caribbean, Latin America, and United States. More international in scope than Part I, this collection was developed by an international editorial board with scholars specializing in North American, European, African, and Latin American/Caribbean aspects of the slave trade.

State Papers Online: Part IV: The Stuarts and the Commonwealth, James I – Anne I, 1603-1714: State Papers Foreign, Ireland and Registers of the Privy Council

State Papers Online, 1509-1714 (‘SPO’) offers a completely new working environment to researchers, teachers and students of Early Modern Britain. Whether used for original research, for teaching, or for student project work, State Papers Online offers original historical materials across the widest range of government concern, from high level international politics and diplomacy to the charges against a steward for poisoning a dozen or more people. The correspondence, reports, memoranda, and parliamentary drafts from ambassadors, civil servants and provincial administrators present a full picture of Tudor and Stuart Britain. Part IV includes State Papers Foreign, Ireland and Registers of the Privy Council.

Note that the Library already has access to State Papers Online, Part II: The Tudors, 1509-1603 and The Stuart and Cumberland Papers (SPO). These can be accessed via the Digital Primary Source and Archive Collections guide or the Databases A-Z list.

As well as giving us access to these 7 databases until 12th July 2023, Gale have also given us access for this same period to a few supplements or updates to databases we already have access to.

You can access all of these as normal via the Newspapers, Magazines and Other News Sources guide or the Databases A-Z list.

Access to all these databases and the supplements is until 12th July 2023.
The long-term trial access is an opportunity for our students and staff to try resources out and give feedback on their quality and usefulness. However, when we trial resources this is not an indication that we plan to or will be able to purchase or subscribe to any of the resources in the long term.