Lulu: the most dangerous dog in Birmingham

The purpose of a headline is to draw a reader into the story written below. “The dog of death roams a city for five hours”, is a headline that surely makes a person want to read more. It conjures up images of a dog shaped manifestation of the Grim Reaper roaming the streets to claim passing souls, or an atomic age puppy causing havoc on buildings and city infrastructure. 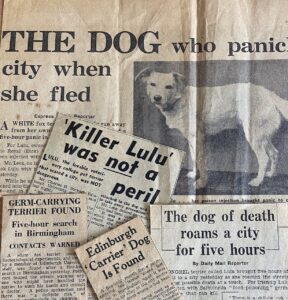 An assortment of newspaper headlines relating to Lulu the dog, 1961

The above headline was published by the Daily Mail in January 1961. Other papers at the time had similar headlines referring to Killer Lulu and the germ-carrying terrier. But what is the story behind these headlines and why is there a collection of these newspaper cuttings in the archive of the Royal (Dick) School of Veterinary Studies?

During the Christmas break 1960-1961, Mr Barry Leek, an assistant in veterinary physiology at the Royal (Dick) School of Veterinary Studies, was visiting Birmingham with his family. Whilst he was driving through town he was involved in an unfortunate incident when a lorry backed into his car. In the ensuing panic his dog Lulu jumped out the car and ran away. Mr Leek quickly informed the police of the missing dog and stressed that she must be found as quickly as possible since she had been injected with the salmonella “duck egg” virus!

A dog, which could supposedly kill a man with a single pat*, was on the loose in Birmingham city centre, and this caused a massive emergency service response. All police officers were informed of the situation, “find this dog…it’s dangerous”. Police cars with speakers patrolled the streets warning people to stay away from Lulu. If anyone had come into contact with her, they were to visit their doctor immediately! The police also visited schools to warn children not to approach the dog and pictures of Lulu were quickly sourced to be shown on the news later that day.

After five hours, Lulu was found in an alley not far from where she was last seen. Relief all round. The city was saved. Though the question remained, how much of a danger was Lulu to society? 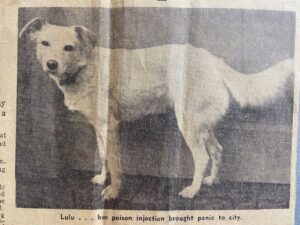 A photograph of Lulu the dog, from the Scottish Daily Express, Tuesday January 3 1961

The University of Edinburgh denied that Lulu could have been injected with salmonella. Mr Charles H. Steward, Edinburgh University’s secretary at the time stated, “We have investigated the matter, and we are convinced that the dog is not used for experimental purposes, and that there was NO danger to anyone.” The R(D)SVS principal, Professor Alexander Robertson, agreed by saying no experimentations were carried out on dogs at the veterinary college and even added, “it is not a very serious disease – in fact, I am surprised there had been so much fuss made.” Mr Leek later admitted that no such injection was given to Lulu and she was suffering a case of naturally occurring food poisoning at the time. He was more worried about Lulu’s reaction to children having not been socialised with them and feared Lulu might pass on salmonella to them.

The result of such a major reaction to a dog with a tummy bug lead to protests in Birmingham for different reasons. One being a reaction to why such a dangerous dog was allowed to go through the city without adequate preparation was allowed. The other protests were concerned with dogs being kept for experimental purposes by the University.

These newspaper cuttings can be found in one folder of many in the archive of the Royal (Dick) School of Veterinary Studies, which is currently being catalogued as part of the One Health project. There are plenty of stories emerging from the pages and they will be shared here.

*even I’m getting swept up in the sensationalism

No comments to show.